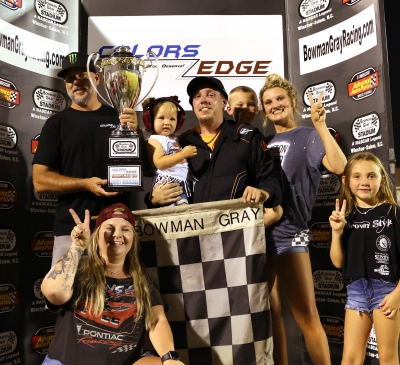 At Bowman Gray Stadium, sometimes the difference between victory and defeat is just being at the right place at the right time. And for Zack Clifton, a little luck helped him to claim the most prestigious win of his career.

Saturday night was the Colors Edge Sportsman 100 at the Madhouse, one of the few long-distance races for the McDowell Heating and Air Sportsman Series. They are known as endurance contests for drivers and cars alike, and Saturday’s battle was no exception.

Tommy Neal had the fastest qualifying lap – and when the top six redrew for starting position, Spencer Martin was placed on the pole with Neal on the outside front row. Martin settled into an early lead until Justin Taylor grabbed the lead away on lap 5.

Taylor then stayed up front for a long stretch while the field battled behind him. Tommy Neal moved to the outside twice during caution restarts to challenge for the lead – but Taylor held firm. With 10 laps to go, Tommy Neal and Amber Lynn tangled, cutting Neal’s tire and causing a collision between the two cars.

It was then Spencer Martin’s turn to move up and try to reclaim the lead he had relinquished early in the race. As the repeated cautions took the race over the 100-lap mark, Martin’s time was running out. He made an aggressive move to dart to the inside of Taylor, sending the #12 car of Taylor spinning and the #5 of Spencer Martin sailing to the front of the pack.

Martin’s time there was short-lived, however. Taylor made his displeasure known, ramming Martin’s car during the caution and ending his chance at a victory.

Kyle Southern then moved up into the lead. Once the green waved again, the carnage continued at the front – this time, Southern and Zack Ore collided as they raced for the win. The field collected behind them, leaving a small lane on the inside open.

And that’s where Zack Clifton happened to be. Even though he had started ninth and had languished in the middle of the pack, he took advantage of the opportunity. Seconds later, he was taking the checkered flag.

“That was the worst car I’ve ever driven in my life – but my guys said to not ever give up,” said Clifton. “I pulled over and let cars go by me. I didn’t want to hold anybody up.”

“They just started tearing up racecars and I was sitting there riding. That’s all I could do,” said Clifton. “They went off into three and just all wrecked. I headed to the bottom – there was a hole and then there was the checkered flag.”

“I was in the right place at the right time. I got really lucky – but hey, I’ll take a win any way I can get it,” said Clifton. “I’ve won a championship. I’ve won many races. But I’ve never won a 100-lapper. I finally pulled it off tonight.”

In the Brad’s Golf Cars Modified Series, Tim Brown continued his hot streak – qualifying on the pole and leading the way through the first 25-lap race. There were a few false starts between Brown and Burt Myers during the initial green flag, but the mind games didn’t shake Brown.

“I know those starts probably looked jacked up, but that 69 car [of John Holleman] had my rear wheels picked up,” said Brown, who was also able to fend off the stout taps from Burt Myers toward the end of the race. “We won and that’s all that matters. I was kinda saving the tires for the second race. I just didn’t want to go and run away from them.”

“We have a saying in our shop. #WorkingHardToBeatYou,” said Brown. “And I feel that’s what this team is about and what our sponsors are about.”

The “Madhouse Scramble” placed Danny Bohn on the pole for the start of the second race. He held off Jason Myers to grab the checkered.

In the Law Offices of John Barrow Street Stock Series, David Creed sailed out into the lead and crossed the finish line first. But after post-race

technical inspection, Creed was disqualified and Brian Wall was declared the winner. And in the Q104.1 Stadium Stock Series, Grayson Keaton won the “A” race with 14-year-old Isaac Harris grabbing his first career win in the “B” race.

The racing agenda for this Saturday, July 31, is the annual Thunder Road Grill Stadium Stock 50 – the longest and most prestigious race of the year for the Stadium Stock cars. Plus there’s racing for the Modifieds, Sportsman, and Street Stock Divisions. And the night ends with a blast from the past as the Classic Modifieds compete.