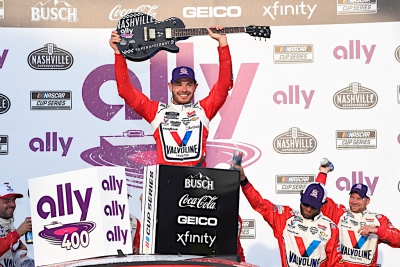 Kyle Larson loves being behind the wheel.

Whether it’s at a local dirt track, a mammoth speedway or simply in his motorhome in the wee hours of the morning traveling from track to track, Larson is at home in the driver’s seat.

And right now, everyone in NASCAR is trying to figure out a way to pass him.

Larson won the inaugural “Ally 400” NASCAR Cup Series race at Nashville Superspeedway on Sunday, leading a commanding 264 laps and sending a clear message that Hendrick Motorsports’ No. 5 Chevrolet is the team to beat in the second half of the season.

A sold-out crowd of 38,000 fans saw the 28-year-old from Elk Grove, Calif., capture the first Cup Series event in Middle Tennessee in 37 years and celebrate in Victory Lane with a stunning trophy and a custom-made Gibson guitar.

“This crowd is awesome,” Larson said. “We’ve had the best car on the race track for about a month and a half now. It’s good to take advantage of that. We had a near-perfect day.

“Everyone all week has been aiming to take home that Gibson guitar.”

Larson is the first driver to win three straight Cup Series points races since Brad Keselowski in 2018 and he has six consecutive top-two finishes. As a team, Hendrick Motorsports has won five straight regular-season races, as well as last week’s All-Star event, also won by Larson.

“We don’t have anything for those Chevrolets right now,” Almirola said. “It’s so hard to race with them. But we have made huge strides to close the gap.  Our race team is doing a great job scrounging and scrapping to build better race cars and it’s nice to come here and run up front, run in the top five and at least be in the mix, so it feels good.  We’ll just keep building on it.”

Aside from a grueling NASCAR Cup Series schedule, fans can often see Larson at various smaller tracks across the country, battling against local stars at their home venues. He estimated he entered close to 100 races last year alone.

“The team was pretty flawless all day long. They’ve been in full stride here for the last seven, eight weeks.”

After racing under the checkered flag, Larson gave his own tribute to the appreciative fans with a full burnout in front of all the grandstands along the 1.33-mile concrete track’s lengthy frontstretch.

“It was a salute to the crowd,” Larson said. “We had enough fuel and rubber to do a good burnout there at the end.”

“We’re happy to be here,” Hendrick added. “I love this place. I loved the crowd. It just felt good. It felt like years ago, with fans shoulder to shoulder. We’re glad to get this win.”