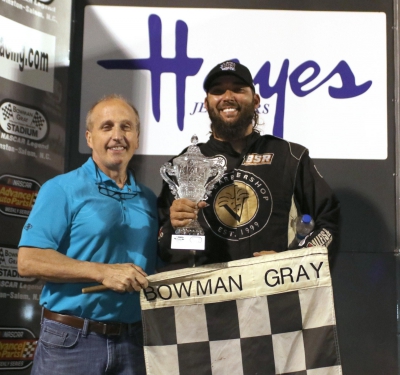 The long wait for Bowman Gray Stadium Racing finally ended Saturday night after being off for nearly two years.

And the racing didn't disappoint.

"So, this is definitely a great start for me."

"This is my home track," he said. "This is the biggest race we've got this season. I'm going to say this is my biggest race of my career. And it wasn't handed to me. I
beat the best -- Brandon Ward, Danny Bohn, the Myerses (Burt and Jason). Those guys are the best. It was not handed to me. We worked our butts off on this car."

The 200-lap race had 12 cautions, and Bohn moved from third to second past Ward on the 11th caution. However, Bohn couldn't overtake Brown on the restarts.

"It's the only race we haven't won, so it's a little aggravating," said Bohn, who won the 2014 Brad's Golf Cars Modified Series championship. "Congratulations to
Jonathan. He had a really good car, too. You know, we put tires on to move through the field. Usually it's where we get to the front first."

"We had a good car like I said," Bohn said. "Second's always good. I haven't, we haven't raced over here in a while. I haven't run a Modified in a while."

For Jonathan Brown, he wasn't sure he was going to be able to race on Saturday night. He didn't come for qualifying on Friday, and after working on his car for the
better part of two days, he qualified 14th in Saturday's Hayes Jewelers 200 after the top 10 qualified on Friday night.

"On Thursday we had an engine problem," Brown said. "...At 5 o'clock Friday morning I was on the phone with Jeremy Gerstner because I knew he was a true racer, and he's
seen everything. So, we worked 45 straight hours on this car. So, I'm pretty tired."

It all paid off for Brown.

"To come over here and win the biggest race of the season with literally no practice," he said. We got maybe 20 laps of practice total with an engine we don't know,
tires we don't know. We went back to our basics - where we were at the last time we were here, and it really paid off. We just stuck with it and tried to be easy as we
could on the tires and beat the best."

Burt Myers led the first 90 laps, but on a caution, he pitted and had to go to the back of the field. In addition, Jason Myers, Jonathan Brown, Bohn, James Civali and
Daniel Beeson pitted.

"I honestly thought there'd be more wrecks," Bohn said. "There were still a lot of cars running at the end. It's not surprising to me. Everybody ran pretty clean, and
they didn't really tear up a lot of stuff."

Bohn tried to use the cautions to his advantage, but Jonathan Brown held him off.

"I cut the 104 (Ward) a couple breaks," Bohn said. "...I think if I could've had a couple chances on the outside with Jonathan then I might've been able to do
something. You know, he had a really good car. So, I really only had one chance at getting the lead there at the end."

Jonathan Brown was able to fend off Bohn, Civali, Chris Fleming and Ward, which all finished in the top five. John Smith was sixth and Brian Loftin, the defending
champion of the Hayes Jewelers 200 in 2019, finished seventh. John Holleman IV was eighth, followed by Tim Brown, who started second. Jason Myers finished 10th, and
Burt Myers was 11th.

"Here's the thing, Mike was telling me on the radio, 'The 04 (Ward) was tight center. If you could just get out away from him you're good,'" Jonathan Brown said. "So, I
tried to switch it up every restart just like whoever's leading over here would do. I played the game the same way everybody else does, and tonight it worked out good
for us."

The win was also extra special for Jonathan Brown. His 19th Brad's Golf Cars Modified Series win tied him for 29th place with his uncle, Don Smith. Jonathan Brown also
noticed that Bowman Gray was packed with around 17,000 spectators.
"To tie my Uncle Don, that's really cool," he said. "You know, that's really cool. And if you think about it, I know I've raced on and off here for like 10 years, I
don't have that many starts. I don't have a lot of full seasons, but the few times we went after the championship we've been top two, three, four. This year, hopefully
we can notch that up and come out and win the championship."

The night started with a 40-lap McDowell Heating & Air Condition Sportsman Series race, and Tommy Neal showed that he, once again, will be a force in the series this
season.

Neal took the lead with 12 laps left and cruised to his 49th win in the Sportsman Series,

"It's pretty unbelievable," Neal said. "Like a kid, dreams really do come true."

Neal won the pole in Friday's qualifying, but there was a full-field redraw on Saturday. Neal drew seventh, while Michael Adams drew the pole.

Adams, who has won 19 times in the McDowell Heating & Air Sportsman Series, held his lead through cautions on laps 10, 16, 22 and 23, before Neal caught him. Neal, who
won his lone championship in 2016, survived three more cautions to defeat Adams, Zack Ore, Justin Taylor and Sterling Plemmons. Amber Lynn finished sixth.

The Law Offices of John Barrow Street Stock Series had a 20-lap race. Billy Gregg, who won the Street Stock championship in 2019 with two wins and 10 top-five finishes,
started on the pole and led from start to finish.

In the first race, Chuck Wall, who won the 2019 championship and his fourth overall, defeated Luke Smith. It was Wall's 23rd overall win in the Q104.1 Stadium Stock
Series.

"I just wanted a good draw. I've worked on the car hard," Wall said. "I was really going to put a lot of effort into this race because I don't know if we'll make it for
the next one or not. We're going to try out best."

There was a restart with four laps left and Grayson Keaton leading Brandon Brendle, with Strmiska in third. On the final lap, Brendle spun out around turn 4, and
Strmiska was able to weave his way past Keaton. Wyatt Sapp finished fourth and Jeremy Smith was fifth.

Strmiska had been in California but came to his home in Lexington on Thursday night.

"To be honest I started dead last. I didn't think I had a chance," he said. "But I worked my way up there with them...Brendle washed up. They just were racing real
hard, and there was enough room down there for me to get in there."

The second of the 11 scheduled weeks of racing is next Saturday. The featured race is the Thunder Road Grill Street Stock 50 for the Law Offices of John Barrow Street
Stock Series. Also on the schedule are twin 25-lap races in the Brad's Golf Cars Modified Series, as well twin 20-lap races in the McDowell Heating & Air Sportsman
Series, and two 15-lap races in the Q104.1 Stadium Stock Series. Plus the night will end with a Midway Mobile Storage Chain Race.