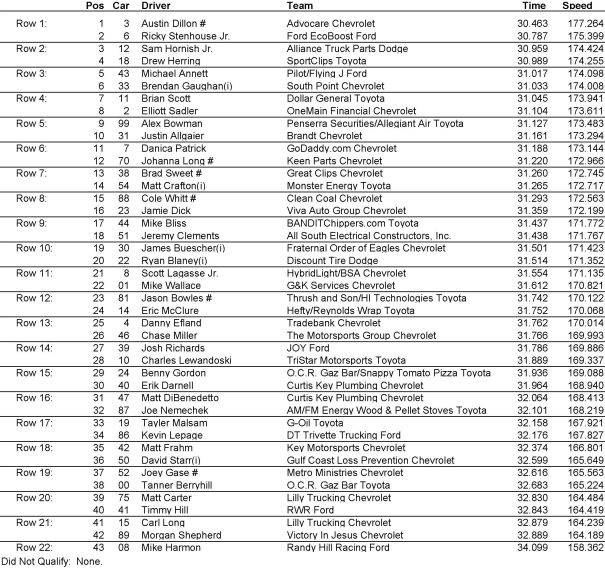 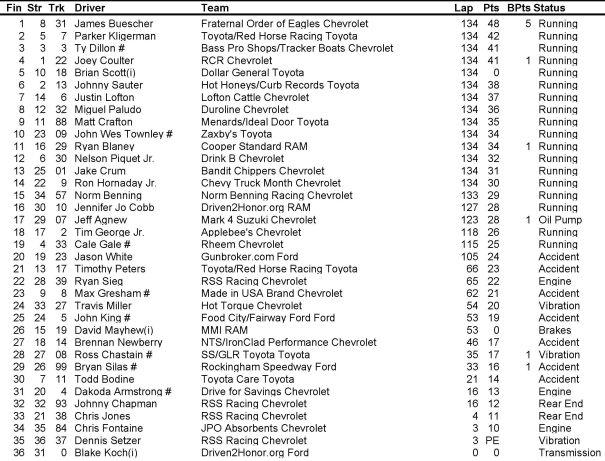 The 22-year-old captures RCR’s third Kentucky Speedway NCWTS pole in the team’s past five visits to the track and his second of the season. He started on point at Michigan International Speedway on Aug. 18.

“I really didn’t think we were going to end up with it (the pole). I was loose getting into three. I just figured that with these trucks, the sides are so big that when you get sideways, it kills them. We were good enough through the center and exits to make up for it. I’m real happy with the truck. We were a little bit loose. I think when it gets dark and we go to racing it’s all going to come right to us,” Coulter said.

His previous best NCWTS Kentucky starting position was sixth in the July 7, 2011 UNOH 225. He took his series track-best seventh-place finishes in that event and this season’s June 28 UNOH 225.

He makes his third career NCWTS front row start at Kentucky after winning the 2011 UNOH 225 pole and starting second in a 225-mile series battle at the track on Sept. 3, 2010.

Ty Dillon will start his RCR truck third after registering a 175.484 mph (30.772 seconds) lap. He’ll make his second career NCWTS start at the track looking for his second consecutive top-five finish. He placed third in this season’s UNOH 225.

Tickets and infield Fan Zone passes for tonight’s event remain and are on sale at the Kentucky Speedway gates. 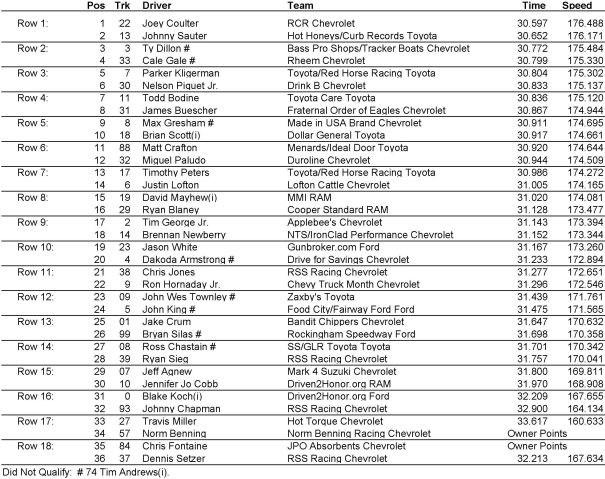 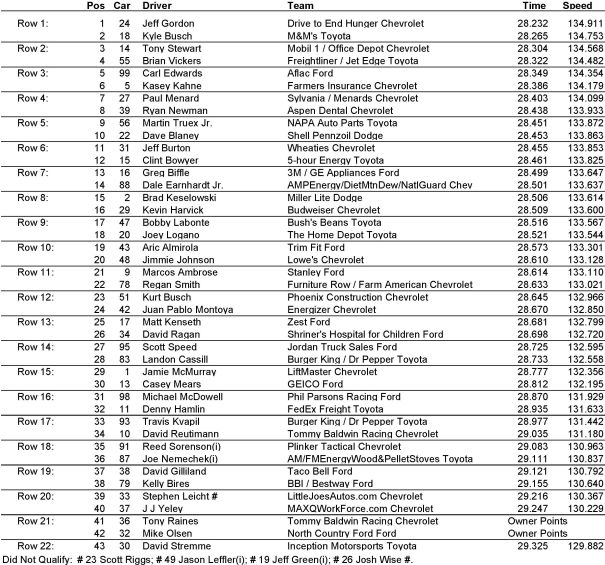 Ricky Stenhouse Jr. will make his 100th-career Nationwide start this weekend at Kentucky Speedway in the Kentucky 300.

“Time flies when you are having fun,” said Stenhouse. “My career started out a tad shaky but I have to thank Jack Roush for sticking behind me and never giving up on me. The accomplishments that our No. 6 team has made the past two seasons are incredible and I am happy to be part of this team and organization. As I step up to the Sprint Cup series next year, I will always cherish my Nationwide career.”

The Mississippi native has been credited with the two highest honors of the Nationwide series, 2010 Nationwide Rookie of the Year and 2011 NASCAR Nationwide champion. In 99 starts Stenhouse has seven wins, 36 top-five and 56 top-10 finishes.

With seven races remaining in the 2012 NASCAR Nationwide season, Stenhouse is a top the championship standings with a nine-point lead over second-place Elliott Sadler.

The Tri Star Motorsport team and drivers Tayler Malsam, #19 G-OIL Toyota Camry, and Mike Bliss, #10 Toyota Camry, are competing in the NASCAR Nationwide Series race at Sparta, Kentucky (Saturday afternoon at 3:30PM on ESPN). Demonstrating the performance and reliability of G-OIL, Bliss is currently 8th and Malsam 13th in the 2012 NNS standings after 26 races.

Meanwhile, the Green Earth Technologies marketing team will be in New Hampshire as G-OIL becomes an official partner in the ‘Greening of NHMS’ at New Hampshire Motor Speedway (NHMS), site of this weekend’s NASCAR Sprint Cup race.

“Delivering performance and environmental benefits at the same time is what Green Earth Technologies and G-OIL are all about,” said Jeffrey Loch, President and CMO of G.E.T. American-made G-OIL is the world’s first and only fully synthetic motor oil to receive American Petroleum Institute (API) certification.

“New Englanders are very environmentally conscious and NHMS is an environmental leader in the motorsports industry. We are very pleased to team up in the Greening of NHMS,” said Loch.

G-OIL products will be used in all NHMS official vehicles including safety, maintenance, service and landscaping equipment. G-OIL will also be offering free samples of G-OIL, 2-Cycle Bio-Synthetic Green Engine Oil, and Bar & Chain Oil products to the 5,000 fans in the NHMS camping areas.

A 36-truck field will take the green flag for the series 15th all-time event at the speedway at 7:30 p.m. Tickets and infield Fan Zone passes are available at speedway gates.

The Westport, Conn., wheelman piloted a Brad Keselowski Racing (BKR) entry to a 19th–place finish earlier this season at the speedway in the June 28 UNOH 225. He posted his NCWTS track-best second-place finish with Penske Racing in 2011.

“This number seven Red Horse racing Toyota Tundra is awesome. (Crew Chief) Chad Kendrick and all these guys have made it easy on me. We show up to the race tracks so well prepared and so fast right off the truck - that we really just fine tune it and fine tune it. When you do that you just get faster.

“We did the actual qual run in practice two and jumped to the top. I think we got something for them in qualifying, which I’m excited about. I’ve never had a pole on the mile and a half,” Kligerman said.

Kligerman noticed his truck handled distinctly different in cool temperatures in the mid 70s on Kentucky Speedway’s tri-oval compared to steamy June temperatures that were near 100 degrees.

“The temperature makes a huge difference. It adds a ton of grip when you have these cool temperatures and cloudy conditions. Those things add up to essentially a different race track. When we were here in June, you’d lift and almost have to brake to move along your line. Now, we come back, and it’s who can be flat out in qualifying. That’s just a HUGE difference. I think we can continue this throughout the weekend and hopefully get that first victory tonight,” he added.

“I always have good practice here; just don’t finish the races well. We had speed and kept speed with old tires and new tires in the first (session) and, in the second practice, finished fifth.

“I feel very comfortable here. This is my fifth time here, so this is one of the race tracks that I really like. I’m really looking forward (to the race) because we have a really fast truck. We just need to make the right decisions in the race and get it done tonight,” Paludo said.

Richard Childress Racing (RCR) driver Joey Coulter was second quickest in the first session with a 176.091 mph (30.666 seconds) circuit. He posted his second career NCWTS seventh-place finish at the speedway in the UNOH 225.

ThorSport Racing driver Johnny Sauter was second on the speed chart in the second session with a 177.270 mph (30.462 seconds) lap. He placed sixth in the UNOH 225 and will make his sixth career NCWTS Kentucky start in the Kentucky 201.

Sept. 7: Richmond (Night race)(FINAL CUT OFF FOR THE CHASE FOR THE SPRINT CUP)

10 CHASE FOR THE SPRINT CUP RACES

Every stripe has a story: Darlington Raceway wants to hear stories from it's fans

Most race fans have that one particular moment or experience they remember most when visiting Darlington Raceway, their own personal “Stripe Story” if you will.

Darlington Raceway wants to hear those stories and memories as it officially kicks off its campaign for the upcoming 2013 season with a theme of “Every Stripe Has a Story.”

With renewals being mailed out today, the track Too Tough to Tame wants to hear from its race fans in a special contest to kickoff the 2013 renewal period, the “Every Stripe Has a Story Contest.”

Do you remember when you saw your first NASCAR driver glance the outside wall leaving the legendary stripe on the wall at Darlington during some exciting on-track action? Maybe it was your fondest memory spending time with family and friends in the grandstands or camping at the track? Or was it a Mother’s Day weekend your mom could not forget by bringing her to the big race?

These are all stories Darlington Raceway wants to hear because each one is unique and memorable and has paved a legacy for why the Lady in Back is such a favorite among race fans since its inception in 1950.

“Celebrating our race fans is something we take great pride in,” track President Chris Browning said. “This contest is not only a fun and interactive way to kick off our renewal period, but it gives us a chance to hear all the unique and different stories that have brought happiness and excitement to our race fans since 1950. We have fans tell us every day how much they love our race track, so this is a great opportunity for them to tell us their experiences and possibly win tickets and pit passes to the upcoming race in May as well.”

“Every Stripe Has a Story” is a theme that will be used by Darlington Raceway throughout the 2013 season, keeping its fans in the forefront of its marketing and advertising campaigns. Providing memorable experiences for its fans is the track’s number one priority so those experiences should be highlighted and celebrated for achieving its priority.

Darlington will also continue to take tremendous strides in the social media landscape, which include its always popular Twitter handle and Facebook page. With the addition of Pinterest and the launching of a mobile application in early 2013, the track is continuing to forge ahead in its efforts to engage its race fans in non-traditional methods.

“With the evolution of technology, it’s more important than ever that we engage our fans in the social media world and in a variety of different ways,” Browning said. “Many of our fans love keeping up with Darlington Raceway via social avenues so we’ll continue to invest in those efforts to give them another way to share their experiences and stories with us throughout the year.”

The contest is easy. Fans can simply visit www.DarlingtonRaceway.com/YourStripeStory, enter in your information and tell us your favorite stripe story. The contest will conclude on Friday, Oct. 26 when the renewal period ends with a winner being selected and contacted on Tuesday, Oct. 30. Entries by mail will also be eligible if postmarked by Oct. 24, 2013 and sent to: Every Stripe Has a Story Contest, c/o Darlington Raceway, P.O. Box 500, Darlington, SC 29540.

The winner will receive two (2) tickets to the NASCAR Sprint Cup Series Bojangles’ Southern 500 on Saturday, May 11, 2013 and two (2) pre-race pit passes, giving the lucky winner exclusive access to pit road prior to the race.