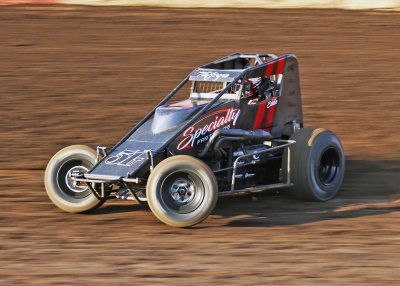 When the Heimark Anheuser-Busch Budweiser Oval Nationals closed the 2022 season at Perris Auto Speedway earlier this month, Eddie Tafoya Jr. ended up a career-best third place in the 2022 USAC/CRA Sprint Car Series championship standings.  The outcome was five spots better than his previous career best of eighth place in 2021.

The biggest key to Tafoya’s prowess in 2022 was his consistency.  The Specialty Fasteners hauler pulled up into racetracks 24 times this year. Every single time, the Chino Hills, California racer started the A main event. Those 24 races took place on nine different racetracks in 3  different states (California, Arizona, and South Dakota).

Of the 24 main events he started, Tafoya finished in the top ten 13 times.  Of the 13, six were top five.  His best finish of the campaign was a second-place result on January 29th at the Cocopah Speedway. He recorded a third at the Mohave valley Raceway on April 24th and placed fourth at Perris on June 25th.

By contrast, the team appeared at 29 races in 2021 and made the A main 17 times.  He finished in the top ten on six occasions.  Four of the six top 10s in 2021 were in the top five.  His best finish of that season was a third at Perris in July.

Tafoya, the 2018 Perris Auto Speedway Young Guns champion and 2019 USAC/CRA Rookie of the Year, finished off his 2022 season with the two biggest events on the USAC/CRA schedule.  First up came the Western World Championships at the Cocopah Speedway near Yuma, Arizona.  That was followed by the Oval Nationals at Perris the first weekend in November.  Each of those race weekends saw the 25-year-old not only squaring off with the best that USAC/CRA has to offer but also the finest drivers from the National Series as well.  They were tough main events to make but the handsome 25-year-old did so every time.

The 2023 schedule should be out soon.  It is safe to say that Tafoya will continue his rise in the sport and will be a contender for the 2023 USAC/CRA championship.  During the off-season, Tafoya, and the Specialty Fasteners #51T team, will be prepping for that very important campaign. In addition to the work on the cars in the shop, the team will be busy exploring corporate partnership opportunities for the upcoming campaign.  If you or your company would like to be a partner with the Specialty Fasteners team in 2023, please contact Eddie Tafoya Jr. via phone at (909) 393-3999 or by e-mail at This email address is being protected from spambots. You need JavaScript enabled to view it.. He will be happy to talk to you and lay out the team’s plans.

Tafoya’s great-looking shirts and hoodies will make great Christmas presents for the special racing fans on your Christmas list.  They are available online at www.specialty-fasteners.com.

Tafoya has a great YouTube channel at the following link https://www.youtube.com/shorts/1hrmC5L80EU.