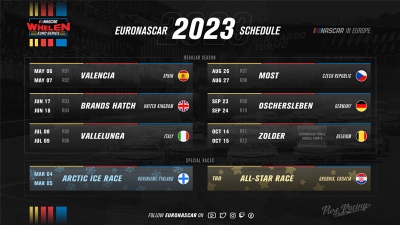 The ​​NASCAR Whelen Euro Series and Autodrom Most announced today that the 2023 NASCAR GP Czech Republic will move to August 26-27, one week earlier than the initially scheduled date. The event, one of the most popular of the season in 2022 with over 35.000 spectators at the track, will once again mark EuroNASCAR’s return to action after the summer break in 2023.

The season will be a unique one, celebrating NASCAR’s 75th anniversary. After making history with the first ever NASCAR event on ice on March 4-5 at Rovaniemi, Finland, the 2023 NASCAR Whelen Euro Series season will officially kick off in Valencia, Spain on May 6-7 with the season opener at the Circuit Ricardo Tormo. The Spanish event will celebrate its 10th edition.

The series will then visit Brands Hatch, UK on June 17-18 for American SpeedFest X, in the middle of a month of June filled with NASCAR action from Le Mans to Goodwood. Vallelunga, Italy will welcome EuroNASCAR for the third time on July 8-9 to close the first half of the season.

The Autodrom Most will host the NASCAR GP Czech Republic on August 26-27, while Germany will return to the NASCAR Whelen Euro Series calendar on September 23-24, when the Motorsport Arena Oschersleben will welcome four exciting races that will close the regular season. The EuroNASCAR Finals will take place on October 7-8 at the legendary Circuit Zolder, in Belgium, to crown the EuroNASCAR Champion of 2023.