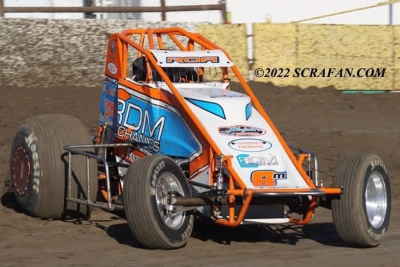 Southern California racing veteran Brody Roa will close out another successful season tonight and Saturday, November 25th and 26th, in the USAC West Coast Sprint Car Series at the 81st running of the Turkey Night Grand Prix at Jim Naylor’s Ventura Raceway.  The veteran driver will be back behind the wheel of Jayson May’s gorgeous #8M sprint car that has already carried him to a pair of victories in 2022.

Roa’s prowess at Ventura and in May’s car makes him one of the favorites in this week’s race.  In two appearances at the beach side track in 2022, he has a win and a second-place finish.  Driving his own #91R car in a USAC/CRA race on June 11th, Roa ended up second in the main event.  He was clearly the fastest car on the track, but on the night, the track was one lane on the bottom.  Rather than wreck the first-place car and possibly take himself out as well, Roa wisely settled for second.  Two months later, he steered May’s car to the USAC West Coast Series main event win on the tiny, challenging oval that is located a stone’s throw away from the breaking surf of the Pacific Ocean.

After returning from Indiana Sprint week, Roa jumped into May’s 360 and led every inch of the way in the USAC/CRA 410 race at the grand re-opening of the Santa Maria Raceway on August 6th.   His other 2022 appearances in May’s equipment came in early February in a pair of CAS/ASCS events at the Central Arizona Speedway.  The first night Roa had the main event in the bag, but the competition was plagued by an exorbitant amount of yellow flags and Roa ran out of fuel near the end of the race.  He restarted at the rear and came back through the field to finish fifth.  Twenty-four hours later he placed second on the same track.

Gates will open at 3:00 p.m. each day at Ventura with cars on the track at 3:15.  The sprint cars will have heats and a dash for cash on Friday.  On Saturday, they will have preliminary main events and a $3,000.00 to win A main. The USAC National Midgets will join the action with practice on Friday.  On Saturday, the midgets will qualify, contest preliminaries, and finish the night with the historic 98-lap main event. The Ventura Raceway is located on the Ventura County Fairgrounds at 10 W. Harbor Boulevard (93001). The website is http://venturaraceway.com/ and the office phone number is (805) 648-RACE.  Friday night adult tickets are $22.00.  Seniors, military, and students get in for $18.00, and it is free for kids under 12 on Friday.  On Saturday, reserved seats are $45.00 for those 13 and older.  Reserved seats for those 12 and under are $25.00.  General admission tickets are $35.00.

Roa comes into the event after ending the 410 sprint car portion of his 2022 season at the 26th running of the Oval Nationals at Perris Auto Speedway. The first night of the Ovals saw the Garden Grove, California racecar chauffeur being the most competitive of the local drivers at the race on the famous Riverside County half-mile clay Oval.  In qualifying in the stellar 40-car field that showed up for the last USAC National and USAC/CRA race of 2022, Roa only managed to qualify 18th fastest.  He shrugged off the time trials result with a convincing win in the first heat race of the three-day event.

For the 30-lap main, Roa, 31 started in the ninth spot.  Racing in the toughest field on the famous Riverside County half-mile clay oval in 2022, the veteran driver was the highest-running USAC/CRA driver in the field.  He was just behind the USAC National Series regulars in the early part of the race.  As the laps dwindled down, he began to infiltrate the invaders and advance toward the front of the pack.  Running on the top, which had an unforgiving cushion, he was in the sixth spot with two laps to go when the cushion bit him and sent the #91R careening into the wall.  Roa looked at the car, saw little damage, and climbed back in.  He restarted at the back and ended up 16th.

On the second night at the Ovals, Roa qualified 22nd fastest. He backed that up with a third-place finish in his heat race. That gave him his second straight ticket into the 30-lap main event.  The veteran driver started that race in 20th and finished 17th.

The tangle with the cushion on Thursday, combined with the 17th place finish on Friday, meant that Roa would have to qualify again on Saturday and make it to the main event through his heat race or the B main.  The affable racing star was the ninth-quickest qualifier and placed third in his heat.  That automatically sent him into the A main for the third consecutive night.

For the 40-lap championship main event, Roa started in the 10th place spot and was 11th when the checkered flag ended the contest and the 410 season.  That was the best performance by a USAC/CRA driver in the race.

If you or your company would like to jump on board and receive recognition as a team partner throughout 2023, please give the two-time USAC champion racer a phone call or drop him a note at the contact information on the top of this release.

Fans can learn more about Roa and the team at https://www.brodyroa.com/. Fans can also check out the team news at Facebook page https://www.facebook.com/br91r/.