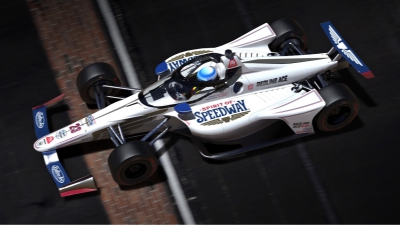 Marotti Autosport is giving race fans an exclusive opportunity to own a share of their race entry for the 2023 Indy 500. Those interested in learning about how they can invest alongside corporate sponsors and be part of this once-in-a-lifetime opportunity can visit spiritofspeedway.com. Inspired by the tradition of past car entries named after cities, the theme of Marotti Autosport’s Indy 500 program and car has been named the “Spirit of Speedway.”

“With our Spirit of Speedway program, we are the first to honor Speedway, Indiana, the hometown of the Greatest Spectacle in Racing,” said team owner Will Marotti, Marotti Autosport Team Owner. "With the goal to become the first fully fan-owned entry, what better way to rally support and excitement than to honor the wonderful town of Speedway.”

In 2016, Marotti partnered with Schmidt-Peterson Motorsports in the 100th running of the Indy 500. Marotti is the only active minister to have led an Indy 500 team. Marotti Autosport kicked off its first crowdfunding effort for a race-fan-owned Indy 500 entry in late 2021. Marotti has introduced grassroots efforts such as a featured banner on Main Street in Speedway and promotional support from local businesses and partners. The team is looking to capitalize on its success from the first round of funding.

For a suggested $10,000 investment, race fan investors receive a 1% ownership stake in the car and a commensurate 1% share of the prize money generated by the Spirit of Speedway entry in the 2023 Indy 500. “Our race fan investors will not only own a part of the car, but they will also have exclusive access to team announcements, driver autograph sessions, and team dinner leading up to the Indy 500. This ownership also provides first-class hospitality during the May and July Grand Prix weekends, and of course, the coveted Indy 500,” added Marotti.”

In addition to their second crowdfund, Marotti Autosport is seeking corporate sponsors for the Spirit of Speedway Indy 500 entry. “We are encouraged by the interest and conversations we’ve had thus far,” added Marotti. “We are committed to creating a motorsports program that will allow race fans to live a dream and deliver value and a platform for a corporate partner at the greatest spectacle in all of racing.”

With this announcement, Marotti Autosport also re-launches their investor portal where race fans can learn more about the investment program and hear from team owner Will Marotti and other race fan investors involved this past season.

With the 2022 season in the books, the team is seeking a competitive IndyCar driver available in 2023 to pilot the car. “We are excited about the talent out there, and with the conclusion of the 2022 NTT INDYCAR SERIES season, some additional drivers are becoming available,” added Marotti. “We have a passion for Speedway, Indiana, and the most prestigious race in the world, and we are seeking to be a competitive entry for the biggest prize in motorsports—the Borg-Warner Trophy!” concluded Marotti.

In addition to the 2016 Indy 500, Marotti Autosport competed in the 500-mile race the following year, along with additional races in the NTT INDYCAR SERIES. The team has also run select races in the Road to Indy ladder series. Since its inception, Marotti Autosport has been competitive, finishing as high as 12th in the 2016 Indy 500. The team ran as high as 4th place in that same race nearing the end.

Rate this item
(0 votes)
Tweet
« Mobil 1 and Hagerty Make Their Partnership Official: The Legendary Motorsports and Automotive Brands are on a Mission to Save Driving and Celebrate Car Culture 5 effective ways to promote your next race event »