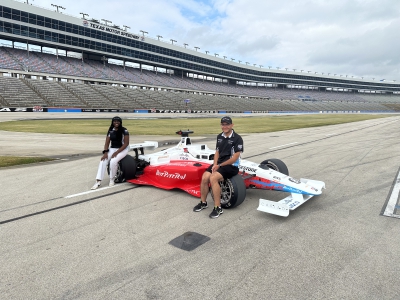 A year ago, they stuck a toe in the water — or, more precisely, a finger on the autonomous driving software — with a woman co-captain who was an engineering senior without, coincidentally, a driver’s license. Who needs one for a driverless vehicle, even an Indy car?
This time, the University of Pittsburgh representation combines engineering undergraduate and business graduate students… with women as co-captains from Pitt (again) and from MIT.
Not only are they a diverse autonomous auto-racing team, but this Pitt group has helped the Pitt, MIT, Rochester Institute of Technology and the University of Waterloo, Canada, amalgamation achieve higher speeds in their second go-round in this Indy Autonomous Challenge. The MIT-PIT-RW team enters its second full season with a race Nov. 11 at Texas Motor Speedway, where they’ll face teams filled with graduate and PhD students, teams coached by faculty members on-site.
While the 2021-22 team sustained a few bumps (including a wall) at the original race at the Indy 500 Brickyard last November and a January competition at Las Vegas Motor Speedway, the 2022-23 team led by co-captain Rotimi Adetunji — a May electrical engineering graduate now working toward a master’s in biomedical engineering (with a robotics focus) at Cornell — and MIT’s Cindy Heredia already has set team records. After new tweaks to all cars and software courtesy of the organizers, they have surpassed speeds over 100 mph in practice runs., with a record of 126 Nov. 1. They have completed the bulk of their racing qualification requirements a week and a half before race day. They have put in the long-term toil: roughly six weeks of testing since September, including three weeks at Lucas Oil Indianapolis Raceway Park and another three at the Fort Worth, Texas, oval where NASCAR and Indy both compete.
“The car is running great!” Adetunji said. “With new hardware, there is always a bit of a rough patch at the beginning, but the team did a great job of adapting, and is consistently having productive and effective track days.
“We’ve had a handful of close calls, but that’s par for the course,” added Adetunji, who unlike last year’s team co-captain, Nayana Suvarna, does have a driver’s license. “The way our team has been able to learn from them and adjust quickly has shown how far the team has come. The team is comfortable with speeds over 100 mph, and that, coupled with more intelligent racing strategy and behavior implemented in the code, really puts us in a great spot…. We have been jokingly dubbed by the [Indy Autonomous Challenge] crew ‘the fastest team ready for track days.’ “
Adetunji has been at Texas Motor Speedway for nearly a fortnight, joined there by fellow Pitt teammate Will Muckelroy III, a junior in computer engineering, and Carnegie Mellon’s Andrew Saba, a Pitt alum (ENGR ’19). Other Pitt team members from the Swanson School of Engineering joining her during testing are: Brendan Duff, a senior in computer engineering, and Micah Nye, a junior in mechanical engineering. So 11 Pitt group members — including four undergraduates and as many graduate students — and roughly 30 of the 41 MIT-PIT-RW team members in all are expected to be on hand by race day.
The Pitt members primarily came through the pipeline of the Robotics and Automation Society club at Pitt. It isn’t all pushing the car to high speeds and nerding around robotics, computers and algorithms, though: These budding scientists also have published their findings. “We will continue to publish our work throughout the year,” Adetunji said.
Mobilitas and PNC returned as sponsors, and the MIT-PIT-RW team also enjoys support from Cadence, RRAI, IBM and RTI.
Four students from the Joseph M. Katz Graduate School of Business who are driving business operations: Erin Kust, Ammar Kinkhabwala, Miriam Dukaye and Aaditi Patil — all MBA and Master of Science candidates scheduled to graduate next spring — are proud of their team and accomplishments. Pitt Business has long emphasized the importance of learning by doing as students put into practice the theories discussed in class.
“Leading business operations, I’ve learned to manage a lot of functions at once,” said Kust, who is in the part-time MBA program while she works as a strategy consulting manager at Elevance. “This experience has been very beneficial to my development as a future leader. I’ve learned how to quickly synthesize the complex issues we experience across all business areas and work with my team to set realistic goals and actions to get us where we need to be.” [Read more about the Pitt Business teammates here.]
Adetunji believes the diversity and creativity of the Pitt group, as well as the four-university racing team overall, contributes invaluably — on the track, off the track, for this week, and beyond.
“We want to show people that anyone can do this and help to develop the vast amount of talent that is out there,” said Adetunji, who considers herself a “citizen of the world.” “Regardless of backgrounds.
“When you look at motorsports, computer science and robotics, there aren’t a lot of women. I think that our team has a lot of diversity that you don’t see in this field generally, and that lets us have the tools to succeed.”
One small example: Heredia, her co-captain from MIT, is an MBA student – not a computer scientist, roboticist, automotive type. Another: Most of the other teams are comprised of primarily graduate students in those latter fields, some whose universities are supported by or closely aligned with major automotive manufacturers or autonomous-driving research projects.
“They've demonstrated what they are capable of, and I've seen them interact with these other teams on the racetrack,” said Sam Dickerson, associate professor in computer engineering and the Pitt group’s mentor/shepherd/cheerleader, though he admires how this team has developed such a thorough management and leadership structure. “[The competitor teams] too have formed deep respect for them and view them as their peers.”
Rate this item
(0 votes)
Tweet
« Willy T. Ribbs Endorses Children's Racing History Book by Mark Dill Formula DRIFT announces 2023 Schedule and major 20th Anniversary initiatives »