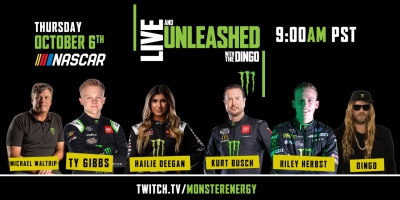 This episode of “Live & Unleashed,” titled “Let’s Go Racing,” is set to feature some of the most high-profile Monster Energy athletes in the sport: Former NASCAR Cup Champion the veteran Kurt Busch, truck series driver and social media phenomenon Hailie Deegan, and two top racers from the Xfinity series: Riley Herbst, and the hottest young driver in the sport – both for winning and his rubbin’-is-racin’ style on the track – Ty Gibbs, grandson of team owner and the legendary former Super Bowl-winning coach, Joe “Coach” Gibbs.

"We're excited to see how the world’s best NASCAR drivers can do in a driving simulation competition and hear their hot takes on the current state of racing," said Monster Energy's CMO Dan McHugh. "We’ve always been intrigued to see if the skills of being a professional driver can carry over to gaming, so we’re putting the virtual rubber to the road to see how it unfolds."

Instead of playing a traditional video game, the virtual racing will take place on a full “SIM” machine. It’s like a video game on steroids – instead of creating a make-believe world, this iRacing, highly-sophisticated piece of equipment simulates real world racing. It functions as a training tool for pro drivers between races and getting back in shape for each specific track after an injury.  All the competitors will be racing on the same driving simulators that the professional drivers practiced on during COVID.

The format will find four racers playing in a round-robin, head-to-head, bracket-format to see who the best “virtual” race car driver is. While two drivers will compete against each other, the other two will be “on the couch” being interviewed by Dingo, revealing the distinct personality of each racer while also bringing to light how special it is to see this kind of virtual racing from real professional racers.

Joining the group will be Monster Girl Pam Rebora. A staple of “Live & Unleashed” and self-proclaimed hard-core gamer, her massive fan base on Twitch and social media will be tuning in to see if she can hold her own against the pros.

Also making a guest appearance is the two-time Daytona 500 winner Michael Waltrip. Waltrip, who has been on-record expressing his opposition to “SIM” racing due to virtual, no consequences basis, is sure to be a catalyst for some passionate debates during the livestream.

As always, the competitor who has the most fun and brings the best attitude, as determined by Dingo, will win the coveted Live & Unleashed trophy!