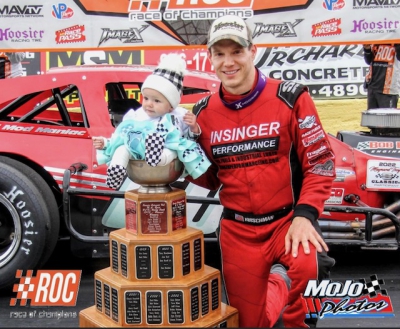 Matt Hirschman of Northampton, Pa., is the most prolific racer in the history of the Race of Champions Modified Series. On Saturday afternoon at Lancaster (N.Y.) Motorplex, Hirschman raced to yet another victory.

Hirschman slipped by his neighbor and defending Series champion, Austin Beers of Northampton, Pa., and went to score his second Series victory of 2022.

“We had a great car today,” began Hirschman in victory lane. “Things just really fell into place for us and it was an unusual race with the limited amount of cautions. We came within five laps of running the race green to checkered. I’m thankful for the effort my team put in and winning here is always great. This track has been good to us over the years.”

Patrick Emerling of Orchard Park, N.Y., raced from 14th to 2nd, slipping by polesitter Beers with just a handful of laps remaining. Beers hung on for 3rd. George Skora, III of Eden, N.Y., came home 4th and Zane Zeiner of Bath, Pa., rounded out the top-five.

Mike Leaty of Williamson, N.Y., concluded a fast and steady 2022 season by clinching his second Series championship. Leaty won two races early in the season at his home track in Williamson, Spencer Speedway and another at Lancaster. Leaty finished 7th on Sunday to earn the championship.

Full results from the US Open for the Race of Champions Modified Series can be found here; www.rocmodifiedseries.com/schedules/event/430215

Full results from “The Fall Classic” at Humberstone Speedway can be found here; www.rocmodifiedseries.com/schedules/event/400755