The NASCAR Pinty's Series rookie driver headed to Delaware Speedway in Ontario last weekend for the final race of the season. 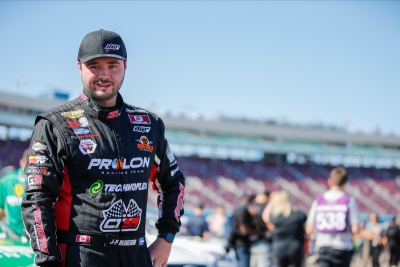 NASCAR Pinty’s Series rookie driver Jean-Philippe Bergeron traveled to Delaware Speedway in Ontario last weekend for the final race of the season. The particularly bumpy half-mile oval gave the team a hard time with their setup choices during practice. Although the Jacombs Racing organization found the right adjustments, the driver had to settle for a starting position from 21st following qualifying. “The weather was not in our favor. It rained just before the race. The track was slippery and there was mud in some places,” said Bergeron.

The #1 Prolon | Rousseau Métal | CTSR Mustang was very fast at the beginning of the race and the driver took advantage of it to start his comeback. As he approached tenth place, the brakes started to deteriorate, which increased the level of difficulty. With 50 laps to go, Jean-Philippe avoided a major multi-car accident. He was able to get back on the leaders lap and get close to the lead. “I thought I would make it to the top-5, but on the last restart I found myself behind slower damaged cars which made passing difficult,” he said, still satisfied with the result. Indeed, Bergeron obtained his best result of the season, a seventh position, just behind his teammate, Alex Labbé.

A Rewarding Season Despite the Setbacks

When Bergeron looks back on his season, he remembers all the mishaps he experienced. Although he had a very fast ride, he didn’t get the results he was hoping for, too often falling victim to bad luck. He still finished the season with a second place in the rookie championship and a tenth place overall.

“I learned a lot this year. I had the chance to race alongside talented drivers in a very competitive series. I was experiencing for the first time most of the tracks I raced on. I improved my driving, there is no doubt about it, and I am very proud of that,” added the driver who bravely faced his share of challenges throughout the season. “The Jacombs Racing team has worked very hard all year to deliver a great car at every race. I would like to thank Dave Jacombs for believing in me and giving me the tools to be competitive,” he concluded.

Bergeron enjoyed his experience in the Pinty’s NASCAR series which he considers more competitive than the ARCA series he raced last year. He hopes to find the necessary sponsorship to return to this series next year for a full season and have the chance to compete with the best Canadian drivers for the win.

Jean-Philippe has been able to count on long-time partners who have allowed him to complete a full season in the NASCAR Pinty’s Series: Prolon Controls, Circuit téléguidé Saint-Roch and Technoflex. To these were added this year the Olivier Group with its Shelby Canadian division, Rousseau Métal, Hipertech, Permatex, Métaux Angers, DL Performance, Lettrapub, Unik, Aviation NETWorx and Aeroskills Tournament.