Greg Van Alst and Team Recharged Ahead of Salem Brawl 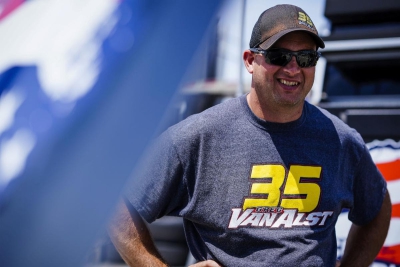 A mission to compete full-time in the ARCA Menards Series for driver Greg Van Alst and his team will soon be complete, but there is still plenty to be accomplished ahead of Saturday afternoon’s Herr’s Snacks 200 at Salem (Ind.) Speedway.

Surviving his most recent race at Bristol (Tenn.) Motor Speedway after scrambling to get his all-volunteer crew to “Thunder Valley” after suffering a setback the weekend prior at Kansas Speedway.

During the Kansas Lottery 150, a mid-race accident wiped out the team’s primary car for the Bush’s Beans 200 at Bristol forcing the team to piece together another car in time to compete in the 18th race of the season.

Since finishing a respectable 14th at Bristol, Van Alst has taken full advantage of the previous off-week to recharge his team and make further repairs to his ARCA fleet.

“We needed it,” said Van Alst of the break. “We all needed it. The grind of working all day and then working in the race shop all night had been wearing on our entire team.

“We feel more refreshed going to Salem. It was very much needed.”

For the first time in nearly two decades, Van Alst will return to the famed Southern Indiana short track in an ARCA car.

Ending his part-time schedule with Locke Motorsports in 2002 at Salem, Van Alst returns looking to avoid

“I feel pretty good about going to Salem,” explained Van Alst. “We found the issues we had at Bristol so we know what we need to improve upon to make things work at Salem.”

Of course, the Anderson, Ind. native returns to the short tracks of Indiana hoping that he can return to top-five status and deliver a similar performance as he did last summer at Winchester Speedway, another famed Indiana race track where it boasts similar characteristics to Salem.

Van Alst, driver of the No. 35 CB Fabricating Ford Fusion, however, explains the two tracks are vastly different.

“Salem, like Bristol, is so different from Winchester,” he explained. “They have similarities but they all are their own beast. It’s been a long time since I have raced at Salem in an ARCA car, but I have learned so much about being a racecar driver in 20 years, I feel like my second try will be much better than the first on Saturday afternoon.”

With short track events this weekend at Salem and the season-finale next Saturday afternoon at ARCA’s hometown track of Toledo Speedway, Van Alst is hoping to storm his team into the spotlight and earn some much welcome momentum that will propel them into the offseason and a focus on 2023.

“A top-five finish would be good for us on Saturday afternoon,” added Van Alst. “We have struggled on the short tracks all year so it would be nice to see the last two races have improvement.

With the offseason not too far in the distance, Van Alst is expected to return to the series in 2023 and while there won’t be any ARCA cars on the track, the former ARCA | CRA Late Model champion says his downtime will be extremely busy.

“Once the checkered flag falls on Toledo, we will quickly be building for 2023,” sounded Van Alst. “We would like to have the cars all in race-ready shape by the start of the season in February.

“Our Daytona car is sitting in a corner of the shop with a cover on it. We just need to clean it up, put an engine and transmission in it and do some basic maintenance and she’ll be ready for the test in January.”

Chris Barkdull’s CB Fabricating, a longtime partner with Greg Van Alst Motorsports has boosted its commitment to the team and will continue its role as the primary marketing partner of Van Alst’s No. 35 Ford Fusion.

Their 26,000-square-foot facility allows them to service the needs of many different industries. Everything from the Automotive, agricultural, aquatic, medical, transportation, electrical enclosures, and much more.

“Through the trials and tribulations of our 2022 ARCA Menards Series season, we’ve tried to approach each race with a positive attitude and with extreme grace because of the support of CB Fabricating and Chris (Barkdull),” Van Alst mentioned.

“With every race complete, even if it is not the finish we are hoping for, it’s a small victory for our team knowing the large mountain that is still left to climb to celebrate in Victory Lane eventually.

“Unfortunately, the championship appears out of our reach, so our focus will shift for these remaining two races to stay tucked up inside the top-five,” sounded Van Alst. “It is going to be tough to keep Sammy (Smith) behind because of the pace of his team right now and Toni and Amber are having solid runs too. But we will just continue to do our thing and see how it all shakes out in two weeks.

“This is a tough series and we are still proud of where we are at.”