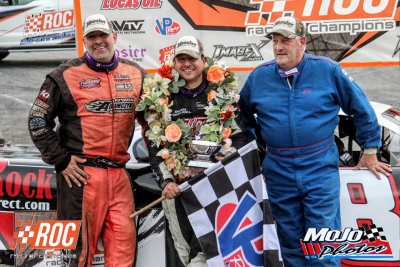 During post-race inspection, the car driven by Lutz was found to have an illegal transmission component. A post-race penalty was assessed. The penalty is a loss of all race winnings and championship points earned during the event. The winnings will be divided equally amongst point fund recipients and distributed in January at the champions celebration.

Tommy Krawczyk of Orchard Park, N.Y., drove to victory in the Race of Champions Super Stock Series event. Krawczyk topped Jacob Christman of Walnutport, Pa., and TJ Cochrane of Cheektowaga, N.Y., who ended up third. It was the second time Krawczyk earned a victory in the Super Stock portion of the Weekend.

Nick Robinson of Elmira, N.Y., raced to victory lane on back-to-back nights. Winning the opening round of the “Dash Series Triple Challenge” for the Race of Champions FOAR Score Four Cylinder Dash Series over Joey Bevacqua of Rome, Pa., and Joe Pettinelli of Rome, N.Y.

On Saturday, Robinson started 16th and worked his to the front to win over Andrew Lewis, Jr., of Ontario, N.Y., and Justin Phillips of Keystone Heights, Fla.

The “Dash Series Triple Challenge” including the Fred Rounds Cup will conclude when the remainder of the event is run on Saturday, April 22, 2023.