Kevin Lacroix Aims for the Win at Delaware 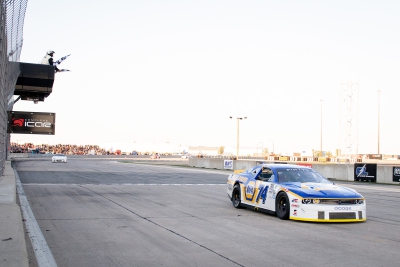 It's time to celebrate the NASCAR Pinty's season finale at Delaware Speedway on Sunday, September 25. Although the championship title will be hard to come by, Kevin Lacroix will give it all to get his fourth win this season.

The Pinty's Fall Brawl will present a 250-lap thrilling event. The Championship is not lost yet for the driver of the #74 Lacroix Tuning | NAPA Auto Parts | Valvoline car as a win is 48 points, and he is only 33 points behind the leader, although Camirand will get 19 points simply for showing up.

"We are usually very fast at Delaware Speedway," said Kevin Lacroix. "Last year, we started last and managed to move up to first. We ended up finishing 2nd because of the battle in the last few laps."

"In 2017, I had been first the whole race, but a competitor had bumped into me during the pit stops," he continued. Lacroix Motorsport is confident of its success in the final round of the 2022 season.

"It felt good this summer to get back to business as usual and back out West and discover Eastern Canada," explained Lacroix. "If it wasn't for my mechanical problem at the Grand Prix de Trois-Rivières, we could have been very close in the battle for the title, even first in the points." It's a big challenge that awaits  Kevin during the race that will start at 4:30 pm on Sunday. The 250-lap race will be interrupted on lap 125 to give the drivers a chance to make a pit stop.