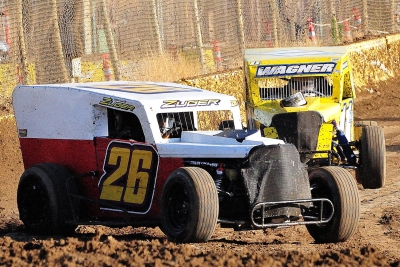 San Jose’s Shawn Jones topped a strong field of competitors for the Friday Pro Division win during the Western States Dwarf Car Association South Bay Regional at Ocean Speedway. The victory is Jones’ fourth of the year in the 1000cc machines on the Santa Cruz County Fairgrounds dirt track in Watsonville.

A total of 55 Dwarf cars from three states were competing across three divisions: Pro, Veteran, and Sportsman. They were joined by a special non-points race for the Four Bangers. Ocean Speedway will host the same lineup on Saturday as well. Grandstands open at 3:30pm Adult tickets are value priced at just $10 for adults, $5 for juniors, and kids 11 and under are free.

San Diego’s Mike Tobiason led the 20 Pro Dwarf Cars to green for the 20-lap nightcap. Terre Rothweiler of Santa Cruz spun in turn two for the first caution on lap six. Jones made maneuvers on the inside line on the restart, with the eighth-place starting driver advancing past Shawn Whitney to take second on lap 12.

Jones then seized the lead from Tobiason on the following lap. Camarillo’s Tommy Velasquez followed Jones up the inside, then won a back-and-forth battle for second on lap 17. Jones grabbed the win over Velasquez, Tobiason, Whitney, and Santa Maria’s Brandon Wiley.

The Sportsman Dwarf Car feature was perhaps the most hotly contested. Chase Hill took off with the lead over an 18-car field in the 20-lap affair. He immediately encountered lapped traffic by lap three. The caution flew for Demetri Brown of Santa Maria spinning in turn three, giving Hill a reprieve. Brown and Keith Costas of Half Moon Bay then tangled in turn four on lap five for another yellow.

Hill spun from the lead on the restart, collecting Dan Varner of Pine Valley and ending his evening. Joe Bohard of Santa Maria assumed the lead but engaged in a side-by-side race with tenth starting Kinser Endicott of Corning. The pair dueled in lapped traffic, with Bohard leading lap ten by just .055 seconds. Endicott grabbed it on lap 11 and never relinquished it. Bohard, Kylee Johnson of Santa Rosa, Isaak Geil of Auburn, and Justin Bingman of Castroville rounded out the top-five.

Gilroy’s TJ Santos was eliminated from the event with an incident in turn four on the opening lap. Amaya Flowers of Watsonville flipped in turn two to require a red flag on lap three.

The second-row starters were ones to watch as Boulder Creek’s Kenny Stragalinos and Jason Lazzerini of Moss Landing represented six total 2022 wins. Lazzerini had a hiccup, however, when he tagged the backstretch wall and had to nurse damage on the right rear the rest of the 20-lap race.

A caution on lap 11 erased a 7.1 second advantage that Myrick had on the field. He went back to work and led the way to the finish. Jeff Durant of Clovis finished second while Merced points leader Austin Sprague finished third. Stragalinos and Watsonville’s Richard Mitchell rounded out the top-five.