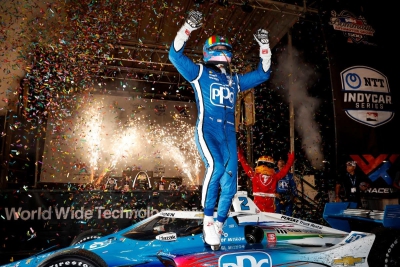 Josef Newgarden came into the St Louis race weekend as one of the championship favorites, and left as five time winner in the 2022 NTT IndyCar Series and the man to beat witn two races left at Portland and Laguna Seca. Newgarden, piloting the No. 2 Chevy for Team Penske, also scored his third straight win at World Wide Technology Raceway.

“I was elated that we want back racing after the rain delay,” quoted Newgarden in the media center, talking about the two hour and nine minute rain delay that took place on lap 217. “Racing here at night is so much better. The second line on the track came in and produced great racing, and I am just happy for my team. It’s a big night for us on the PPG Chevy for Team Penske.”

Rookie of the year contender David Malukas drove his No. 18 Honda for Dale Coyne Racing, which is based in Malukas hometown of Chicago, Ill., to his best finish of his career of second place. “To do it here in my home state and with a team from my hometown is awesome. My spotter Poncho was helping me out the whole entire night and helped us get second. I was so happy that we managed to go back to the front, because I knew from practice yesterday, we had a great car.”

The race started an hour earlier than scheduled, with the green flag in the air around 6 p.m. Est due to storms looming in the St Louis area. Will Power in the No. 12 Verizon Team Penske Chevy started on the pole and led a race high of 128 laps of the 260 available. The first caution of the night didn’t come until lap 145, when Jack Harvey in his No. 45 Honda slammed into the outside wall in turn four. Green flag pit stops and strategy was the name of the game throughout the first 200 laps of the event, due to looming weather making its way towards the track. Rain finally hit Gateway on lap 214, and the 500 kilometer race was red flagged on lap 217 at 7:55 p.m. Est for two hours and nine minutes.

The track was finally ready to go around 9:50 p.m., and the engines were restarted around 10 p.m. With 43 laps remaining, time was limited for drivers to make their moves, causing chaos. Newgarden passed his teammate Scott McLaughlin on lap 225, and didn’t let go. But it wasn’t that easy, as McLaughlin and Malukas were catching him with just a few laps remaining. While Malukas did make a daring pass on McLaughlin with two to go on the high side, it wasn’t enough to catch the 2019 IndyCar Champion. Newgarden scored his 25th in the NTT IndyCar Series, tying him with pioneer racer Gordon Johncock. On September 4th, the IndyCar stars will fight it out for the second to last race of the season in Portland, Ore., at Portland International Raceway for the Grand Prix of Portland.