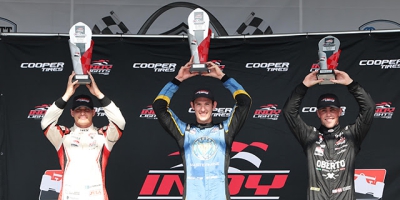 Australian-American Brabham drove his No. 83 Andretti Autosport car to victory by .6770 of a second over the No. 26 HMD Motorsports with Dale Coyne entry of Lundqvist. It was Brabham’s second victory of the season, with his first coming in late February at the season opener at St. Petersburg, Florida.

Brabham saved his best for last in the fast, caution-free race. Lundqvist led the first 71 laps of the 75-lap race, but Brabham used his preferred high line on ovals to gain momentum in Turns 1 and 2 on Lap 72. Brabham then dove under Lundqvist in Turn 3 on that lap for the decisive pass, never trailing again.

“I could tell he was starting to get loose toward the end of the race,” Brabham said. “I think I showed too much of what I could do there in Iowa, in the top lane. I told the guys on my team I don’t want to show anyone anything because I think they’re learning too much from me, especially my teammates. I was saving that top line for the last couple of laps.”

Brabham challenged Lundqvist for the lead in his favorite outside lane with five laps to go in the previous oval event, July 23 at Iowa Speedway. Lundqvist moved up the track and their cars touched, damaging Brabham’s front wing and dropping him to third at the finish. Lundqvist was assessed a three-spot penalty for avoidable contact and tumbled from first to fourth in the final running order. Brabham’s teammate McElrea inherited the victory.

“I just wanted to win so badly, especially after Iowa,” Brabham said. “I just had that grit.”

Lundqvist couldn’t shake Brabham for the first 71 laps of today’s race, but he controlled a gap of around six- to seven-tenths of a second for the first 60 laps. Then Brabham moved to the high line to gain momentum and sliced into the margin, trailing by .1936 of a second on Lap 71 before making the decisive pass on the next trip around the 1.25-mile, asymmetrical oval in the shadow of the famous Gateway Arch in St. Louis.

While Lundqvist fell short of his sixth victory of the season, the big picture looks very clear: The Swedish driver is zeroing in on the series championship.

Lundqvist leads second-place Brabham by 108 points with just three races remaining. He needs to lead by 109 after the next event, Sunday, Sept. 4 at Portland International Raceway, to clinch the title. Live coverage from Portland is scheduled for 1:15 p.m. ET on Peacock Premium, INDYCAR Live! and the INDYCAR Radio Network.

A doubleheader Sept. 10-11 at WeatherTech Raceway Laguna Seca will conclude the season.