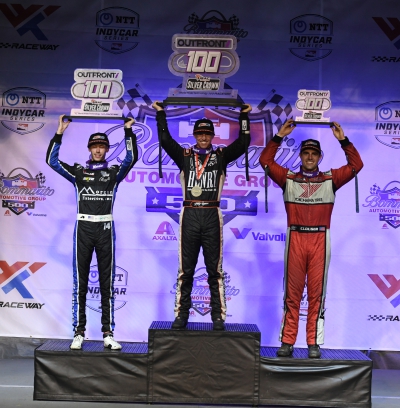 Doran-Dyson Racing’s Kody Swanson won his fourth straight USAC Silver Crown event and padded his point lead Friday night when he was victorious in the OutFront 100 in the shadows of the Gateway Arch at World Wide Technology Raceway.

Driving the blue No. 1 sponsored by Henry Repeating Arms, Glenn Farms and Duncan Oil, which is powered by a Lanci Ford engine, Swanson also won an unprecedented 40th Fatheadz Eyewear pole with a new track and a new world record. He also set the fastest lap of the 80-lap race on the 1.25-mile asphalt oval during the 37th victory of his career in this series, extending another of his records, as he is the most successful driver in the history of the series.

The race victory came at the 14th different track where Swanson has won USAC Silver Crown races, which was another record. It broke J.J. Yeley’s 13 tracks.

Swanson, a native of Kingsburg, Calif., who now lives in Indianapolis, led wire to wire in the three previous USAC Silver Crown races going into Friday night’s race (one was non-points paying). He led the first eight laps from the pole on Friday, but three other drivers also led. The competition was stiff, and it was easy to get shuffled back a bit in the running order due to drafting. Swanson was as far back as sixth during the race, but he was able to battle back where others could not.

Bobby Santos III, who has the most USAC Silver Crown victories at this track with two, led lap nine. Justin Grant led laps 10-17 and Davey Hamilton Jr. led laps 18-32 before Swanson retook command and led again from laps 33 through to the checkered on lap 80.

At one point (lap 73) he had a 2.548-second advantage over Hamilton. There was a late yellow flag that closed up the field, but his margin of victory over Hamilton was still 1.158 seconds.

Mario Clouser came on strong late in the event to finish third followed by Grant and Nathan Byrd.

There were five caution flags that complicated things.

The first waved with only one lap down when Tom Patterson and Gregg Cory crashed in Turn 1.

Swanson remained in the lead on the restart on lap eight, but Santos got under him in Turn 3 to lead lap nine, and then Grant passed both Swanson and Santos to take the lead on lap 10. The top pack of cars ran inches apart, and Swanson was pushed back further by Taylor Ferns, Logan Seavey and C.J. Leary, as he ran in fifth or sixth place from laps 11 through 24.

Things started to look up again when he passed Santos on the lap 25 restart to regain fourth, and then immediately vaulted into third by passing Ferns on lap 26. He passed Grant on the outside in Turn 2 on lap 29 for second place, and retook the lead on lap 33 by passing Hamilton on the frontstretch and sealing the deal as they headed into Turn 1.

Hamilton was persistent, however, and stayed very close. He even ran the fastest lap of anyone in the race at that point on lap 38. But Swanson topped that on lap 41 with a 31.411, and he had built his advantage over Hamilton to almost a second by that point. A lap later Swanson led by over a second, as he was 1.086 ahead of Hamilton.

By lap 45 he was able to increase his lead to over 2 seconds, but that all disappeared when a yellow waved on lap 49 for Travis Welpott in Turn 1. Another yellow with 58 laps down when Santos slowed due to mechanical difficulties kept Hamilton and the other top runners close for the next 10 laps.

By lap 68 Swanson and Hamilton had separated themselves from the rest of the field, as the other top runners were busy duking it out between themselves for third through fifth, but Swanson was 1.098 seconds ahead of Hamilton. He had stretched that to 1.783 seconds with 10 laps to go, and 2.548 seconds by lap 73.

At that point Ferns stopped on the frontstretch while running third to bring out the final yellow on lap 74, and Swanson’s big lead over Hamilton disintegrated. Clouser, who was a whole straightaway behind in third, was able to close up too.

Swanson was up to all challenges on the restart on lap 77, however, and took the checkered first.

“This Doran Racing team puts in so much effort to have a great car,” Swanson said afterwards. “I’m thankful for them and for the support of our sponsors like Henry Repeating Arms, Glenn Farms and Duncan Oil. Our Lanci Ford ran great. But it takes a team effort, and I’m thankful to be part of this team.

“On that one restart I was fifth. I got shuffled back; they were running hard. Maybe I was a little pouty about it, as I got a little further back than I wanted. But then I was able to advance after a good restart. Luckily I got a big draft on Davey, and luckily we were able to hang on at the end. Some of those restarts were awfully tough.”

With the victory Swanson and Doran-Dyson Racing extended their point lead in the USAC Silver Crown series with 460 points to Seavey/Rice Motorsports’ 397.

Doran Racing also fields a car for Swanson in the 500 Sprint Car Tour. Its next race is Sept. 10 at Berlin Raceway in Marne, Mich. (That event was postponed on Aug. 13 due to rain.) Swanson is second in that series’ current point standings with three races to go, only two points behind, as he has 1,149 points to Dakoda Armstrong’s 1,151.

All of the races in both series are streamed live on Flo Racing.