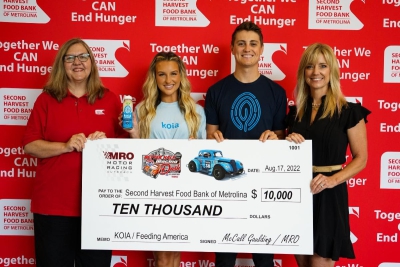 During an event held at Second Harvest Food Bank of Metrolina headquarters in Charlotte, McCall Gaulding, the winning driver of the 2022 Better Half iRacing Dash, presented the organization the entire $10,000 purse she won from this year’s annual Motor Racing Outreach (MRO) fundraising race.

Joining McCall was her crew chief, NASCAR Camping World Truck Series driver Zane Smith. They presented the check to Kathy Helms, CFO of Second Harvest Food Bank. Also in attendance was MRO Board of Directors member and Commissioner of the Better Half iRacing Dash, Kristin Labonte.

The amount of $10,000 will provide 70,000 pounds of food to those in need. Kathy Helms, CFO of Second Harvest Food Bank of Metrolina (left) is presented with a $10,000 donation from 2022 Better Half iRacing Dash winner McCall Gaulding (second from left), NASCAR Camping World Truck Series driver Zane Smith (second from right), and MRO Board of Directors member/Better Half iRacing Dash Commissioner Kristin Labonte (right).

It is through community partners like Motor Racing Outreach that we are able to reach more individuals and companies who are interested in helping us feed our neighbors in need.”

This year’s win of the Better Half iRacing Dash, an event held and broadcast on FS1 in late May, marks Gaulding’s second victory in as many years.

“It was very educational and emotional visiting Second Harvest and learning about their regional hunger relief operations as part of the Feeding America network of food banks,” said Gaulding, whose race car sponsor, KOIA, is a nutritious, plant-based beverage maker. “Opportunities like this to feed hungry people and pets is why I love participating in the MRO Better Half iRacing Dash each year.

I had a lot of competition from the other NASCAR Better Half drivers this year. It’s a fun event for great causes. I don’t know if I can win again next year for a third time, but I’m willing to try.”

As the commissioner of the event, Labonte and her team were very instrumental in putting together and promoting the event, which aired on FS1-TV during the popular “NASCAR Race Hub” daily show.

"As a board member, I am honored to represent Motor Racing Outreach today,” Labonte said. “MRO's work has an incredible breadth and such a heartfelt intentional impact on the NASCAR community and the Charlotte area where so many of us call home. As the ‘Commissioner’ of the Better Half iRacing Dash, I am really proud of McCall and all the drivers who participated. The effort each driver-crew chief team put into the competition and race preparation, plus the tremendous commitment to fundraising was second to none. These women should be inspiring for all of us - look at what we can accomplish when we come together to do good. Congratulations to McCall and her charity Second Harvest, job well done."

To learn more about Second Harvest Food Bank of Metrolina, check out their website www.SecondHarvestMetrolina.com and for more information about MRO, log on to www.Go2MRO.com.