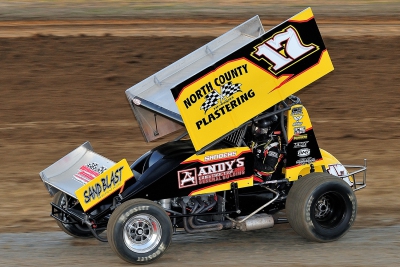 Watsonville’s Rickey Sanders continued his hunt for the 2022 Ocean Sprints presented by Taco Bravo championship, scoring his first-career series win in the penultimate weekend of action for the 360 Sprint Car Series on Friday night. Sanders held off Bud Kaeding through lapped traffic on several occasions en route to the 30-lap triumph.

“Bud’s been racing for a ton of years. He’s won a million a races. He’s really good in lapped traffic. I’ve watched him and my brother (Justin) battle for years so this means a lot,” Sanders said. “My brother – we’ve been texting each other all week, trying to get better. I think we figured it out!”

Sanders earned the pole after winning the Gizdich Ranch Dash and lined up alongside fast-time qualifier Kaeding. The leaders rapidly encountered slower traffic by the fourth lap of the event. Cole Danell of Visalia slowed to the pits as the first car out and was awarded $100 by Geoffrey Strole’s team for his misfortune. Fresno’s Craig Stidham continued a challenging night by slowing into the infield with damage which earned him the Beer Optics Hard Luck award.

Wayne Katen spun in turn three while being lapped to bring out the first caution on lap seven. The leaders were quickly back into thick traffic on lap 12. Morgan Hill’s J.J. Ringo had a run outside of Joey Ancona of Concord for fifth but the duo collided on the backstretch, bringing out the yellow flag on lap 14 and ending both driver’s evenings.

Fifteenth starting Dylan Bloomfield of Discovery Bay outfoxed Livermore’s Travis Labat for fourth while Sanders and Kaeding again drove into traffic on lap 20. Sanders continued to impress as he paced the field. Brandon Stidham spun on lap 21 in turn four for a yellow flag. Bloomfield took advantage of the caution to charge past Gilroy’s Kurt Nelson to take third on lap 25.

Sanders slid in front of a lapped car on lap 28 to clinch a car length win over Kaeding, followed by Bloomfield, Nelson, and Oakdale’s Bradley Dillard. Bloomfield’s drive through the field earned him the Price Rite Hard Charger as well.

Blake Bower of Brentwood won his third consecutive Ocean Speedway Western Midget Racing feature in one of the most hotly contested in series history at the speedway. Fresno’s TJ Smith made his series debut in the No. 11 Triple-X chassis, winning his heat race and leading the feature from the pole.

Bower and his teammate Bryant Bell of Oakley battled side-by-side for third for several laps. Logan Mitchell of Santa Cruz stopped on the front stretch with a mechanical issue on the right rear for a caution on lap 11. On the restart, Nate Wait of Lodi and Peoria, Ariz.’s Cory Brown tangled in turn one.

Bower seized the lead on lap 15 but Smith was undeterred. Smith tried multiple times to cross over Bower in turns one and two, but Bower held on to win in the close battle. Bell finished third followed by multi-time Delta Speedway Micro Sprint champion Caden Sarale of Stockton, and heat race two winner Adam Teves of Concord.

Hobby Stock points leader Joe Gallaher won his ninth feature of the season by claiming the $333-to-win Terry Traub Tribute. Norm Ayers of Corralitos led the opening lap from the outside before Sam Kennedy drove up the inside to lead lap two. A caution flew on that lap. On the restart, fourth starting Gallaher drove into the lead around the outside.

Skyler Chairez of Atascadero slowed up in smoke for a caution on lap six. Kennedy drove back into the lead briefly on lap seven on the outside but Gallaher took it back on lap eight. Gallaher led the rest of the way to top Kennedy, Adriane Frost, Mark Cooper of Scotts Valley, and Wally Kennedy of Freedom.

Andy Obertello of Hollister flipped in turn two to require a red flag on lap 13. He was uninjured. Lind dove inside Fitz on several occasions including nearly taking the lead on lap 15 in turn three. Lind finally completed the pass on lap 18 exiting turn four.

Bobby Hogge IV nabbed second over Fitz at the stripe with Pettit and Cody Burke of Salinas rounding out the top-five finishers.

Jacob Mallet, Jr. – a five-time winner this year – spun on the backstretch but kept going and the race remained green. Hagio advanced from seventh to third by lap ten, then the field moved into traffic by lap 12. Robertson, Merced’s Richard Ragsdale, and Hagio ran nose-to-tail until a caution on lap 15.

Mallet had charged all the way back to fifth under green flag conditions, then collided with Baggett to send Baggett spinning in turn two for the caution. Hagio drove around the outside of Ragsdale for second on the restart, then took the lead on the inside when Robertson drove wide in turn four on lap 14. Hagio topped Mallet, Robertson, Ragsdale, and Adriane Frost at the finish.

Ocean Speedway races again this Friday and Saturday nights with the Johnny Key Classic weekend. Saturday’s finale serves as the championship race for the Ocean Sprints presented by Taco Bravo, battling with the stars of the Sprint Car Challenge Tour.