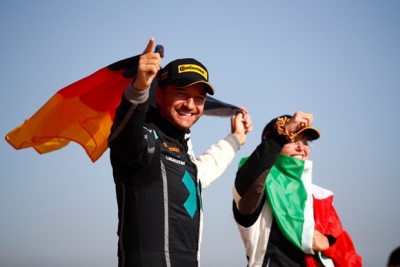 From Championship Driver to XITE ENERGY Racing driver, Timo Scheider was thrown in the deep end as he took on his first race at Extreme E’s first double-header, co-organised by Automobile Club d’Italia and Regione Sardegna.

The German was called up to join Tamara Molinaro, who drove for the Championship alongside Scheider last season, behind the wheel for the XITE ENERGY Racing team in Sardinia.

Despite the difficult circumstances, it was a scenario that the 43-year-old took in his stride as he secured second on his maiden X Prix start in a dream debut.

Extreme E: What did you make of your Extreme E debut?
Timo Scheider: I think the entire paddock, the team managers, and drivers made something of this. They reacted nicely to my success and of course, it felt good to get that kind of feedback and spread that kind of energy in terms of performance.

It’s always something special when you’re on site for one and a half years, and you finally get the chance to prove yourself in terms of performance. In the end, we all know racing is down to performance and results.

To just jump in with XITE and Tamara without knowing each other as teammates and without knowing the team meant no advantages for us. We started from scratch, and we were guessing a bit in terms of set up and directions.
The team’s all-new driver line-up made an instant impact at the NEOM Island X Prix I to finish second in Sardinia after on-track winners Rosberg X Racing (RXR) received a 30-second time penalty which dropped them to third.

XE: A podium first time out is hugely impressive. How did you manage that?
TS: In the end, I think I was just lucky to jump in and feel comfortable and to set good pace straight away. I had confidence even though we had no idea about the set up, but it was more about finding ourselves as teammates and getting Tamara comfortable.

I couldn’t just focus on my own feelings which has been something new for all of us. That was the target, and in the end, it was about making no mistakes and avoiding problems and penalties and stuff like that.

It was pretty impressive to be honest because we didn’t expect anything coming into the weekend without testing and without knowing the new suspension – but that was a positive shock I would say!

XE: Yourself and Tamara looked like a great partnership, how did you gel so quickly?
TS: Well, we know each other like teammates but of course when it comes down to driving everyone has their own feelings and their own preferences. I have my thoughts on the car, but I understood quickly that getting Tamara comfortable in the car was just as important. We’ve known each for quite some time now and it was super lucky for us to team up and perform well together.

XE: You've been working with Extreme E and helping to develop the circuits throughout your time in the Championship. What were you advising the team in terms of development during the week?
TS: This time all the teams knew the track from last year. I had no idea about the last sector as that had changed. Honestly, yes, I was driving the track last year for a few laps in the ODYSSEY, but after this the other teams have been racing and testing, and I haven’t had anything.

Just knowing a track layout doesn’t mean you are facing any advantage. So actually, compared to the rest of the field in pure driving and knowledge we are way behind the others.

Whatever it was, the team was super motivated and that was really impressive. To go there and see every mechanic and engineer fighting so hard, that was something amazing to see.

Scheider and Molinaro failed to do one better in the second part of the Sardinian double-header, coming away from the Crazy Race with a DNF after a run of misfortunes in the NEOM Island X Prix II.

XITE ENERGY Racing finished Qualifying in ninth place. The team could have been higher up the order, but with Tamara Molinaro recovering from a dislocated shoulder after the previous Final, she lost crucial seconds in Q1 with a half-spin and a penalty for Scheider in Q2 saw the team finish fourth in the Heat.

It all came down to the Crazy Race, which saw XITE ENERGY Racing chasing down the pack until Molinaro charged off course, unsighted by the dust from Woolridge's spin and putting the team out of contention for another podium.

You have to get everything together though and we got unlucky with Q1 when Tamara had her half-spin. We lost a lot of time and ended up P9 which means you’re in a bad starting spot for the Crazy Race.

I also got a 30 second penalty for contact with Timmy [Hansen] which from my point of view was not a penalty at all. The result saw Timmy gaining a position via contact, and we have seen that many times. It’s how racing is, and I think that’s what spectators want to see, but of course we need to be sensible.

The good thing is that we had the pace. If anything, we picked up more pace and closed the gap to the front runners which was nice to see. Of course, there are bits and pieces that I need to improve on, and this is the case for Tamara and the team as well.

XE: What are your expectations for Chile?
TS: It’s a new track for everyone, nobody knows anything about it. We will for sure aim again for the Final and once you’re there, anything is possible. It would be nice to prove another time of the high level of performance we can achieve.

Rate this item
(0 votes)
Tweet
« MANN-FILTER celebrates a race victory and podium success at the Nürburgring Sebastian Vettel revealed as the most costly F1 driver for 2022 so far... »