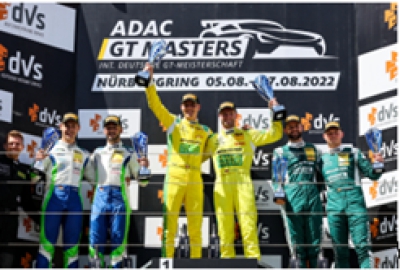 With 23,500 fans on hand, the ADAC GT Masters this past weekend broke the attendance record at the Nürburgring for the fourth time running – and that wasn't the only record to fall. MANN-FILTER team driver Raffaele Marciello etched a new record in the history books with the fastest Nürburgring qualifying result of all time. 27-year-old Italian Raffaele Marciello and his 36-year-old team colleague from Germany, Maro Engel, rounded off a successful racing weekend with two pole positions, a race victory, and second place overall. The two MANN-FILTER junior drivers, Elias Seppänen (18, of Finland) and Frank Bird (22, of Great Britain), completed the weekend in the top 5.

While all of Germany was talking about a summer heatwave, the forty-two ADAC GT Masters drivers headed into the Saturday morning's first qualifying at a cool outdoor temperature of 12 degrees Celsius. It didn't take long until the tires heated up to racing temperature. In his second lap, Raffaele Marciello finally let the MANN-FILTER Mamba bite: the Italian completed a lap of the 3.629-kilometer track in just 01:25.544 minutes, setting a new qualifying record. If that wasn't enough, by clocking the fastest lap time, he secured for himself and teammate Maro Engel the best starting position for the first race and scored the first three points of the weekend.

"I'm very pleased," noted the 27-year-old happily. "I had fun on the track, not much traffic, enabling me to drive a very fast lap."

The two junior drivers in the sister Mamba were likewise successful in the qualifying: Elias Seppänen achieved his best result so far this season, recording the fourth-best time this session.

A race victory and the silver medal: Marciello takes the lead in the Championship standings

Saturday noon the famous words sounded from the speakers, "Drivers, start your engines", which in the MANN-FILTER Team LANDGRAF means "Beast mode: On!“ – words which the four Mamba drivers took literally. Marciello immediately moved ahead of the pack and steadily built his lead. Despite the safety car phase, which dashed his advantage of over six seconds, the AMG pilot succeeded in handing over the Mamba at race halftime to his new team colleague, Maro Engel, in first place with three seconds edge. The AMG driver clinched the wire-to-wire victory after a total of 41 masterful laps.

"Lello did a mega-job today," came his praise after the race. "He handed the car over with a solid lead and good tires. We set out to bring home as many victories as we can, and today was a good start. The team worked wonderfully together, all around." Marciello could only return the compliment: "I'm really happy to share the cockpit with Maro. He's certainly one of the best, if not the best GT driver in the world." Surrounded by umpteen joyfully celebrating fans sporting yellow-green caps and MANN-FILTER flags, the two drivers accepted the trophy and, the AMG pilot, thanks to the full point score, was crowned halftime champion.

"Go for the bite" is also the motto of Elias Seppänen and his teammate Frank Bird. Starting from the second row, the junior team ran a strong race. With thrilling duels and door-on-door maneuvers, the MANN-FILTER duo showed the spectators some exciting racing action. The second Mamba crossed the finish line on Saturday in sixth place overall: the best result yet for the two junior pilots this season.

Best result this season for the junior Mamba, and silver trophy in the second race

The Mamba drivers were confident and highly motivated as the track starting light was switched to green on Sunday morning. The second qualifying session stood on the program. Maro Engel did the same as his team colleague and didn't let any other driver catch him, securing him the double poles for the Mamba at the Nürburgring. The Pirelli Pole Position Award went for a second time to a snake charmer. Premier for Maro Engel: It was his first pole position in the ADAC GT Masters.

Frank Bird, who completed the qualifying with the MANN-FILTER junior Boliden, likewise succeeded in repeating the prior day's success and took fourth place, which then led to a third place starting position when the second-placed BMW was hit with a qualifying penalty.

The starting gun sounded for the second race, and Maro Engel displayed a real rocket launch. The Mamba came under a fair amount of pressure, yet a professional driver knows how to keep a strong opponent like Jules Gounon behind him. The prior day's story seemed to be repeating itself right up until the pit stop, but then Marciello was hit with a controversial penalty lap for blocking the pit lane after taking over. That cost time and the Italian lost the lead, yet he jockeyed the Mamba across the finish line in second place. "The penalty was rather odd," he stated, venting his anger. "It just depends on how you interpret things. Nevertheless, I'm not complaining. We've collected a good number of points, and after this weekend, we have the championship in our sights."

Frank Bird, who started the race from the third position, drove a strong first stint, and when he handed over to teammate Elias Seppänen, the team was already reckoning with a place on the podium for the junior Mamba. Running in third place, the young Fin was penalized for too short a pit stop time, which pushed the duo back into fourth place. Still: a spot among the top 5 placers was the best result for the two MANN-FILTER juniors so far this season, who were on the podium at least in the junior standings.

"We're getting better and better. I was faster than expected in the qualifying," notes Bird, summing things up. "The start was fantastic, and I was neck-in-neck with Jules Gounon. It was our best race so far, and I hope that we keep this pace up right through to the end of the year." Team colleague Elias Seppänen added, "We were too quick in the pit lane, that's why we were penalized. Still, the weekend was very good and I'm confident that we can build on these successes when we race at the Lausitzring."

Beast mode: ON! The fight for the championship is on.

A successful weekend comes to an end for the MANN-FILTER Team LANDGRAF. With 16 points lead, Raffaele Marciello moves to the top of the championship standings, igniting the fight for ADAC GT Masters championship. Six races at three events lie ahead for the team. The Mamba is hot for more victories, and is delighted in particular with the support of the many fans who also came in droves this weekend and created a fantastic atmosphere in the stands and paddock.

The successful weekend also inspired the junior talents on the MANN-FILTER Team. Elias Seppänen and Frank Bird have gotten a taste for it, and look forward to the coming races. With their best performance so far this season under their belt, the junior duo wants to continue strutting their stuff among the "big shots".

There's only a short breather before the next racing event. In two weeks already (August 19-21, 2022), the ADAC GT Masters will make a guest appearance at the Family & Friends Festival at the Lausitzring. The fast race track there promises some thrilling racing, and two fast Mambas are ready to bite!