Onwards and upwards for Veloce Racing after a challenging double-header 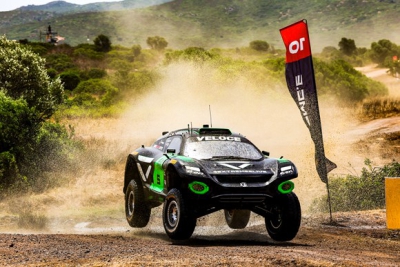 Following an extended break after the first X Prix of Extreme E Season 2, the on-track action resumed with two rounds in one week at the NEOM Island X Prix, co-organised by Automobile Club d’Italia and Regione Sardegna.

The action-packed Sardinian double-header saw Christine GZ back in action for her Veloce Racing alongside Lance Woolridge, with both drivers looking to build on the promise shown in NEOM, Saudi Arabia.

Veloce Racing looked set for one of the quickest Qualifying times at the Desert X Prix in February. However, with the finish line fast approaching, GZ carried too much speed into one of the final corners and the car flipped into a dramatic barrel roll.

The result was a fractured ankle for GZ and a spot in the Crazy Race for the team, where Hedda Hosås made her Extreme E debut in GZ’s stead, but the team just missed out on the Final.

Sardinia offered the British outfit a chance at redemption. Double the racing meant double the points, and the British team managed to move off the bottom of the standings. ABT CUPRA XE sit in Veloce’s wake, but the team will need to push hard if they are to catch JBXE, who currently sit 11 points ahead.

Veloce Racing was playing catch-up from the outset in Sardinia when Woolridge missed Free Practice due to illness, which was then followed by broken suspension in Qualifying 1, but the team managed to bounce back in the second round of Qualifying.

A confident run in the five-car Q2 Heat saw GZ make a blistering start, where she got the better of the JBXE car off-the-line in her first race back from injury.

As the lead female in the race, GZ handed over to Woolridge in third position and the South African took second place from McLaren XE immediately. Veloce received a post-race penalty for speeding in the Switch Zone, but their participation in the Crazy Race was already confirmed having finished second behind ACCIONA | SAINZ XE Team in the Heat.Veloce Racing bowed out of the NEOM Island X Prix I in spirited fashion following a nail-biting Crazy Race.Running in third position on the first lap, Woolridge was faced with a reversing Sara Price, as the No.99 GMC Hummer EV Chip Ganassi Racing car pulled back on to the track.Woolridge took impressive evasive action to avoid contact, but the brakes of his ODYSSEY 21 were damaged when he was forced through the track-side signage in the heart-stopping incident. Veloce Racing eventually finished second in the four-car race.The first-ever Extreme E double-header concluded with Veloce Racing missing out on a place in the Island X Prix II Final in another winner-takes-all Crazy Race.There was drama from the outset as Woolridge went side-by-side with Genesys Andretti United Extreme E on the run down to the first turn. Both cars made contact as Woolridge slotted into second during the early running, but all was still to play for as the race progressed.Woolridge kept Catie Munnings under pressure throughout his lap and was left with little alternative but to make a lunge for the lead as they neared the Switch Zone. The South African tried to squeeze the car down the inside of his rival over a jump, but further contact tipped the Veloce car into an unfortunate half spin.

GZ took over the car in second place and made a valiant effort against Kevin Hansen in the JBXE car, but finished the race in third-place after a hard fought week for the team.

Christine GZ, Veloce Racing, said: “It just wasn’t our week in Sardinia. Of course, I have had a challenging few months recovering from my accident in Saudi earlier in the year, and the pace just hasn’t quite been there for us as a team this week. We showed flashes of speed and we really felt that we had a chance to make the final. We gave it everything, but it just wasn’t to be this time.”

Lance Woolridge, Veloce Racing, said: “The car has been much improved as the week has developed and we were fighting for victory in the Crazy Race, which could have put us into the final. I gave it my best shot and had to try to get past the Andretti car, but contact unfortunately sent us out of contention. That’s probably been the story of our week, as we have not had the fortune with us at the right moments, but we will come back stronger in Chile in September.”

The 2022 Extreme E campaign now moves on to Chile on 24-25 September, before concluding with the season finale in Uruguay on 26-27 November.