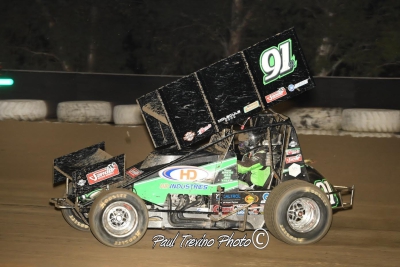 After competing in Indiana Sprint Week for the first time since 2019, California veteran sprint car racer Brody Roa will be right back in action when the USAC/CRA Sprint Car Series hits the track this Saturday night, August 6, at the Santa Maria Raceway.  Roa will be behind the wheel of the familiar #8M owned by Jason May.

After being shut down due to Covid in 2020, the Santa Maria Raceway, which first hosted racing in 1964, reopened in 2021.  However, circumstances that had nothing to do with racing, caused the track to be shuttered a little over a year ago.  Much to the dismay of fans and drivers alike, rumors swirled that the popular track was done for good.  But persistence by the track operators paid off and the facility roars back to life on Saturday for the first time in 2022.

Like all drivers, Roa was ecstatic to hear the track was reopening.  His prowess at Santa Maria has been phenomenal and is second to none in USAC/CRA competition there since 2017.  In the seven series races at the San Luis Obispo County 1/3 mile oval over the last five seasons, the affable Garden Grove, California racer has only finished worse than second two times.  One of those results was a third-place finish.  His other five appearances produced three wins and two second-place outcomes.

Saturday’s race will be Roa’s first time back in May’s car since a pair of races at Central Arizona Speedway on the second week in February.  At the first night of action at the track located in Casa Grande, Roa had a good size lead when his car started running out of fuel in the waning laps.  He ended up with a frustrating fifth-place finish.  Twenty-four hours later he placed second at the same venue.

Indiana Sprint Week consisted of eight races in nine days.  One of the races, the Terre Haute Action Track, was rained out.  Another at the Lawrenceburg Speedway was rained out just before the main event.   In seven nights of competition in the “Hoosier State,” Roa, 31, qualified for the main four times. Racing against the toughest fields of the year, the mains he qualified for were at Lawrenceburg (the rainout), Circle City Speedway in Indianapolis, Bloomington Speedway, and the Tri-State Speedway.

“Well we’re finally home from Indiana Sprint Week,” Roa told his Facebook followers on Monday.  “So glad to get home to my girls, my wife Tailor, and our daughter Addi. That was a long two weeks away. Our Sprint Week I feel was pretty solid even though the end results don’t show so much. Poor qualifying efforts on the driver’s end, as usual, set us way back for the rest of the night. Any feature we missed was by one or two spots after coming from deep in the semi or C main. A huge thank you to all of the people that made this trip possible and my amazing wife for holding down the fort at home. I know it wasn’t easy.”

In 2022, Roa will race USAC/CRA, USAC National, and other select events, in his #91R BR Performance/HD Industries Eagle. He will also drive the #8M for May Motorsports in select USAC West Coast events. The 2019 USAC Southwest and 2017 USAC West Coast champion is always open to discussing other driving opportunities.

If you or your company would like to jump on board and receive recognition as a team partner throughout the 2022 racing season, please give the two-time USAC champion racer a phone call or drop him a note at the contact information on the top of this release.

Fans can learn more about Roa and the team at https://www.brodyroa.com/. Fans can also check out the team news at Facebook page https://www.facebook.com/br91r/.