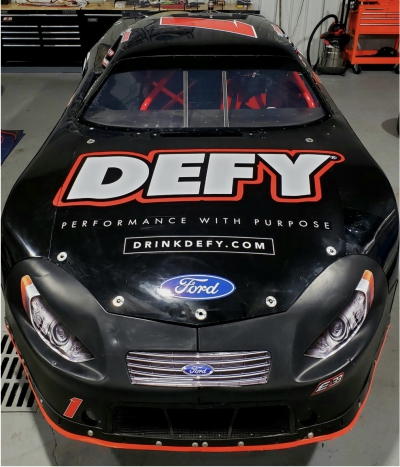 Premier Performance Brand DEFY has signed on as an associate sponsor on board Caleb Johnson's No. 1 Pro Late Model Ford. The familiar DEFY brand colors will be making its debut at the "Birthplace of Stock Car Racing” Hickory Motor Speedway for the Carolina Pro Late Model 100 on August 6th.

The native of Colorado, Johnson first began racing at the age of five in quarter midgets. Climbing the motorsports ladder, fe earned his first national win as a rookie at the 2016 Western Grands at the young age of seven, and shortly after continued his winning streak and building his reputation as a competitor around the country. Since joining the E33 Motorsports team at the beginning of the 2022 season, Johnson has focused on developing his talents in the Carolina Pro Late Model Series.

“Growing up in a NFL family, I can't tell you how excited I am to represent an amazing company like DEFY,“ said Johnson. ”It’s really cool to represent a brand and product that can truly help other athletes and those in sports who want to recover quickly. I personally enjoy the DEFY alkaline water, which helps me to stay hydrated before each race. Thank you to Terrell Davis and the entire DEFY team for welcoming me and supporting my dreams.”

DEFY, the world’s first mainstream performance CBD beverage with 0% THC, is primarily known for its high-performance alkaline water, DEFY Water. DEFY's product line is designed specifically for athletes and those who want to become better in the gym, especially when it comes to muscle recovery.

Pro Football Hall of Famer and DEFY Founder Terrell Davis commented, “I am proud to welcome Caleb to the DEFY team and support his journey as a motorsport driver. Caleb is a driven and talented race car driver, and at his age, he’s truly defying the odds. I look forward to watching him change the game, on and off the track.”

Be sure to tune into Speed51 TV's Racing America to catch all of the action from Hickory Motor Speedway on August 6th and 7th. For more information on E33 Motorsports or how you can get involved, please visit E33 Motorsports.