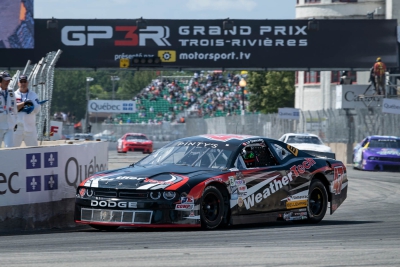 August 4th, 2022 – Driver Louis-Philippe Dumoulin and his #47 WeatherTech Canada | Groupe Bellemare team are thrilled to be back at the Grand Prix de Trois-Rivières (GP3R) this weekend in the NASCAR Pinty's Series. This is certainly one of the most popular events on the series calendar and is even more important to Dumoulin Competition as it takes place in their backyard.

Indeed, Louis-Philippe Dumoulin is a crowd favourite as he is a home-town boy and proud to be! “Last year, we had some fans in the stands, but they had no access to the paddock. Since the beginning of this season, it's been a pleasure to greet and chat with them. I'm looking forward to racing in the streets back home with the energy of the fans, our families and friends around us,” explained Louis-Philippe.

The driver of the #47 WeatherTech Canada | Groupe Bellemare car will be going all out for his third career victory at the GP3R, having already won the event in 2014 and 2019.

The title race is shaping up to be epic all the way through the season. “Everything is still possible in this very tight battle. With only five races left, it is absolutely essential that we do well in Trois-Rivières. Fortunately, our team has prepared some race winning cars for us,” added Louis-Philippe Dumoulin.

Four Cars On The Track

Dumoulin Competition is preparing for the ultimate event of the season, as the team will enter four cars, including one driven by former Formula 1 World Champion Jacques Villeneuve.

“I'm looking forward to being back on track with my brother Jean-Francois. The GP3R is a pivotal moment for Dumoulin Competition that we are all living through as a team. We also enjoy working with Louis-Philippe Montour who is driving a car prepared in our shop in all five Pinty’s road races this year.” added the highly motivated driver.

For his part, Jacques Villeneuve has already teamed with Louis-Philippe Dumoulin, in the 2013 GP3R using a car prepared by Scott Steckly. “Jacques Villeneuve is a great driver with a vast record of achievement in motorsport. It will be a historic moment because our goal is to score a podium entirely filled with cars prepared by Dumoulin Competition,” concluded the three-time champion.