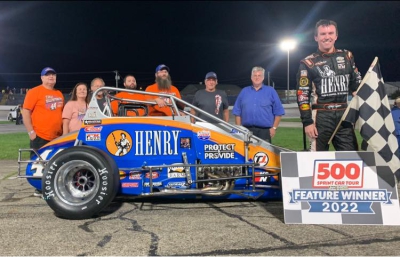 It was fitting that the driver who won the inaugural Gene Nolen Classic Saturday night at Anderson Speedway was the same driver who gave the late Little 500 Hall of Fame team owner something he had pursued for years — a Little 500 victory.

Swanson won the Little 500 at this same high-banked asphalt quarter-mile oval while driving for Nolen Racing in 2018 and 2019.

Swanson, a native of Kingsburg, Calif., who now lives in Indianapolis, was the fastest qualifier in the field of 25 but he had to start fourth due to the series’ policy of inverting a varying number of the top starters in each race.

He passed his former teammate, Shane Hollingsworth, for third in Turn 1 at the start.

When Jacob McElfresh passed polesitter Brian Gerster on lap nine to take the lead, Swanson went with him and moved into second place.

He took the lead from McElfresh on lap 15.

“I used a diamond move,” Swanson related afterwards. “I went high in Turn 3 and got a good run off Turn 4. We ran side by side for the lead for about a lap before I could clear him.”

He led the rest of the race in the Lebanon, Ohio-based team’s No. 44, picking his way carefully through lapped traffic while keeping an advantage of over a second over all his challengers with his car, which is powered by a Binks-prepped Chevy V8 engine.

There were only two caution flags in the race and they both came early, causing a long green-flag run for the last half of the race.

Yellow-flag laps didn’t count. Swanson’s lead of 1.289 seconds over Hollingsworth disappeared with 25 laps down after Derek Bischak spun and kept going in Turn 2 to bring out the first caution.

Swanson had a 1.221-second lead over Hollingsworth when the second yellow waved on lap 40. That caution was caused after there was contact between Taylor Ferns and Swanson’s brother, Tanner, which caused Tanner Swanson to hit the wall. A suspension piece broke on his car and he was forced to come to a stop low in Turn 2.

Kody Swanson got a great restart, however, and he quickly rebuilt his lead over Hollingsworth. He was over 3 seconds ahead by lap 60. The gap narrowed now and then as he dealt with lapped traffic, but it was over 5 seconds with 10 laps remaining.

The series points leader, Dakoda Armstrong, passed Hollingsworth for second on lap 94, but he was too far behind to mount a challenge to Swanson. Hollingsworth finished third. Ferns placed fourth and Bobby Santos III rounded out the top five.

Swanson won the pole on Saturday afternoon with a time of 11.166 seconds. He set the fastest lap of anyone in the race when he was timed in 11.418 seconds on lap 28.

The race was presented by The Tin Plate Fine Foods and Spirits and CB Fabricating. All of the series’ races are streamed live by MAVTV on Flo Racing.

Swanson was third in the point standings going into Saturday’s event, 29 points behind the leader, Armstrong. Coming out of it he is unofficially in second place, just eight points behind Armstrong.

The next 500 Sprint Car Tour race is tomorrow night (Monday, Aug. 1) at Lucas Oil Indianapolis Raceway Park in Brownsburg, Ind. General admission is free for this event, which was postponed in March due to rain.

Although Swanson made Saturday night’s victory look easy, he said “it was nerve-wracking in traffic.

“This series doesn’t allow any radios, so without a spotter I had no idea how close second place was,” he said. “I was trying not to lose the lead while still being careful and pick my way through the lapped traffic.”

Swanson’s spotter in other series is his wife, Jordan, who offers valuable insight as well as letting him know how close he is to the cars around him.

“Our car was really good,” he continued. “This racetrack has been tricky this year, and it’s been tough to tell what we’ve needed on shorter or longer runs to be better. We had a little of both tonight, and I’m glad we were still hanging in there since the last half of the race went green.

“Our tires were pretty worn, but I think that just about all of us were sliding around at the end,” he added.

“I was trying to be careful in traffic; I’m glad we were able to finish it off. I appreciate the support of our sponsors and all the efforts of the men and women on this Doran Racing team. Everyone on this team tries to give us the best chance we can to win.”

Winning a race named in memory of his former team owner was very meaningful.

“I hope Gene would be happy about it,” Swanson said. “I spent a lot of time with the Nolen Racing team. Gene and I were friends, and we became family when we raced together. And that friendship has continued now with Gene’s son, Greg. I’m thankful to Anderson Speedway for putting on this event.

“It means a lot to me to win a race in his memory. I was looking through some photos of us at sprint car races and Silver Crown races today. I have lots of special memories to look back on. It makes me get choked up when I think about it. Winning the inaugural Gene Nolen Classic is very meaningful to me, and I’d like to think that Gene would be pleased.”