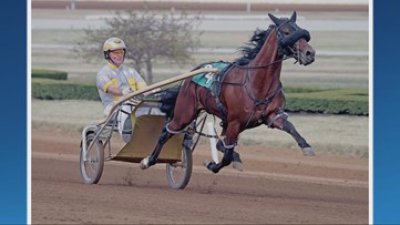 A racehorse drowned in a pond at a track at MGM Northfield Park in Ohio on Monday after finishing second in a harness race, the Ohio State Racing Commission confirmed on Wednesday.

Handlers were unhooking the horse named Alfred Hanover from the two-wheel race bike when a nearby tractor scared him and he ran into the pond and drowned, Freddie Hudson, CEO of the U.S. Harness Racing Alumni Association, told Cleveland TV station WKYC.

Marty Irby, the executive director of Animal Wellness Action, told Reuters that the Ron Burke-trained horse was still wearing his leg hopples when he entered the water, which prevented him from being able to swim.

Irby added that a similar type of incident had occurred at MGM Northfield in the past and track officials had previously said they would put up a barrier around the pond but did not. Construction on a fence had started on Wednesday, Irby said.

"Where else would we tolerate any athlete drowning during a sporting event without a serious investigation? The authorities should investigate this incident, and MGM Northfield should elevate their standards to protect the horses at all costs," continued Irby.

This event, though tragic, is definitely an outlier, stated Steven Wolf of Steven Wolf Consulting.

"It is very rare that racehorses drown as in this case. Yet, it was the second horse to drown within a year at MGM Northfield Park. They have already put up a makeshift fence until a new one is installed," stated Wolf.  "Nearly every racetrack in North America has an infield pond. In most cases it is for fire safety to allow firefighters access to water in case the grandstand catches fire. Tracks then try to beautify the ponds with fountains and lights and even pink flamingos.
I was led to understand at Pompano Park that in 58 years only one horse ever drowned. Some have gone in it, but were rescued. "
"People need to understand the following," Wolf continued.
"1. Horses are natural born swimmers.
2. A harness racing pacer wears restraints on their legs called hobbles. Mix that in with its harness and the long lines that reach back to the driver so he can steer and control the horse. All this equipment and a horse thrashing in the water, the lines and hobbles restrict the horses leg movements, they get tangled up and drown.
3. A harness racing trotter does not wear any hobbles and can thus swim freely if need be.
4. Most horses that get loose do not want to go into a pond and try to head back to their stable. But there are always exceptions."
MGM Northfield Park did not immediately respond to a request for comment but general manager Matt Buckley told WKYC that the track was "deeply saddened" by the death.
"It is unfortunate that situations like this have occurred," added Fred Segal, Vice President, Florida USHWA and one of the authors of Broward County, Florida's Large Animal Disaster Plan. "Any facility that has horses, racetrack, training center or even boarding and turnout farms, needs to look at all potential hazardous situations and attempt to implement safety practices to try and prevent incidents like this from occurring. Further, it is my belief that all equine facilities should have a risk management plan and train people in large animal technical rescue."
"As the body count continues to climb," Irby concluded, "these rampant deaths continue to turn the betting public away from the horse racing industry."
Although this is definitely an isolated incident, it still brings to the forefront the lack of safety advances in horse racing, especially compared to racing with hundreds of horsepower as opposed to just one. With the large sums of money spent on these events, one would think that the competitors, both human and equine, should be provided with the safest environment possible. However, it seems that most gaming companies would prefer to make the slot areas more plush that spend another penny on parimetuels.