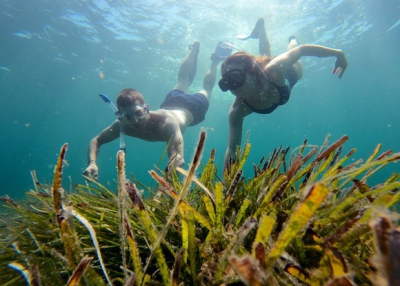 Sport for purpose series, Extreme E, has just completed an action-packed, first-ever double-header, the NEOM Island X Prix I and II, on the stunning island of Sardinia.

The event, co-organised by the Automobile Club d’Italia and Regione Sardegna, offered far more than just a thrilling motorsport spectacle. Away from the track, its drivers, scientists and partners all took centre stage when it came to supporting Sardinia’s sustainability initiatives.

Alongside the on-course action, Extreme E’s drivers had the chance to get involved in several Legacy Programmes, including that of partner Vodafone Business which announced the next phase of its collaboration with Extreme E to support local environmental projects.

During 2021, devastating fires in Sardinia destroyed 20,000 hectares of land, displaced over 1,000 people and killed around 30 million bees. The calamity resulted in incalculable damage to thousands of livelihoods, as well as to nature, including damaging water quality in the ocean. Extreme E continues to help restore the historic olive groves lost to the wildfires.

Wildfires such as these across the world are responsible for 20% of total global CO2 emissions and cost $5bn to fight. Together, Extreme E and Vodafone Business have begun a fire prevention campaign within the area of Montiferru.

As part of this project, Vodafone Business is deploying long-life Low-Power Wide Area Network (LPWAN) sensors to quickly detect any fire and promptly send an alert to the authorities – an innovation that supports Vodafone Business’ sustainability efforts, including agriculture, forestation and decarbonisation of energy grids.

The low-cost IoT gas sensors operate without the need for cellular coverage and will be installed in trees to detect the smouldering phase, before the fire takes hold, which will preserve forest footprint by shortening reaction times in the ‘golden hour’. Using a Mesh Gateway to connect to a cloud-based alert centre means this is a much faster-acting solution to the problem of wildfire detection than using cameras or satellites.

Newly appointed Championship Driver Fraser McConnell was on hand to test the technology out for himself.

Fraser McConnell, Extreme E Championship Driver, said: “Before I arrived, I did not realise just how much more there is to Extreme E outside of the racing. There is a lot of focus on building awareness of issues that people may not know about, or those that do know but are not sure how to help. I found it cool to finally be a part of it.

“I really enjoyed the Legacy Day with Vodafone Business. Everyone involved was extremely passionate and knowledgeable about the topic. It was so new for me – I was constantly asking questions and they probably got sick of me doing so!

“Everyone had a wealth of knowledge – especially Peter [Professor Wadhams, Extreme E’s Scientific Committee] and Vodafone Business regarding implementing their technology. It felt like everything was really coming together to make something applicable to helping.”

Meanwhile, other teams from the Extreme E grid took to immersing themselves in the surrounding waters of the Mediterranean. Snorkelling in Laguna di Norato area, they were able to learn first-hand all about Posidonia oceanica, seagrass, and how Extreme E is helping to analyse and replenish seagrass beds in Sardinia.

Seagrass is thought to be one of the most rapidly declining ecosystems in the world, and Extreme E’s goal is to plant one million new plants of Posidonia oceanica by 2030.

Studies from the last ten years have shown that despite only occupying 0.04 per cent of the ocean floor, seagrass stores 10 per cent of the oceans carbon and can capture 30 per cent more from the atmosphere than its tropical rainforest equivalent. The drivers were able to see how it is being restored and conserved by local organisation, Mediterranean Sea and Coast Foundation (MEDSEA), with the support of Extreme E.

Professor Lucy Woodall, Extreme E’s ocean expert and member of the championship’s Scientific Committee, said:“In Sardinia the main shallow-water ecosystem is seagrass and, in general, seagrass is thought to be one of the most rapidly declining ecosystems in the world.

“These immense meadows of seagrass are valuable nurseries for young fish as well as valuable for blue carbon, where we would describe them as ‘ocean carbon storage habitats’. Consequently, preserving seagrass ecosystems is a vital step in combating the climate crisis. It was great to see so many of the Extreme E grid, as well as partners of the series, get involved to understand the importance of seagrass as well as snorkel down to the seagrass meadows to see how vibrant they are.”

Alongside environmental issues, Extreme E’s visit to Sardinia continued to highlight the importance of equality in motorsport. Before the highly anticipated double-header, Extreme E invited local schoolgirls on-site introducing them to life behind the scenes of the ground-breaking championship.

The girls were given the thrilling opportunity to sit inside the cockpit of the colossal ODYSSEY 21 and witnessed the women in action in the Extreme E paddock. Several of the series’ female drivers, including Veloce Racing’s Christine GZ and XITE ENERGY Racing’s Tamara Molinaro, introduced the girls to the life of a racing driver.

To finish off an already unforgettable day, the awestruck girls were also given a front row seat to view the ODYSSEY 21s in action, piloted by some of the best female drivers in the world.

Christine GZ, Veloce Racing, said: “It’s been great to see the girls on track and it’s great for them to see how things work on the inside. Most of them were already racing, others not yet, and some were saying maybe one day we can too, to which I said if you work hard, you’ll get there.

“I told them that I started off as a mechanic which they found quite cool, and it was cool for me to get to talk to them in this way.

“The best part is the fact that they can see that there are female drivers in every team. The gender equality in this championship is great and to see that at this level it can happen with all the amazing drivers that are here was really encouraging for them.”

A week of double the action saw more Tipping Point talks than ever before at Extreme E’s latest X Prix. These thought-provoking talks are now a firm fixture in the schedule, and in Sardinia covered topics ranging from the importance of technology and innovation in the fight against climate change to the positive impacts of blue and green carbon.

The talks opened with a dedicated focus on technology and innovation. Here, media and guests heard from Vodafone Business, EY and Enel X, all of whom play essential roles in Extreme E’s sustainability efforts.

Discussion points from another Tipping Point talk focussed on blue carbon, as Professor Lucy Woodall and Alessio Satta were joined by Francesca Frau from MEDSEA to elaborate on the leading role that oceans play in the delicate balance of our world’s climate.

Professor Peter Wadhams concluded: “From a racing perspective the double-header in Sardinia was definitely a flagship event for Extreme E, but I found that off-track the series was able to raise awareness of so many environmental issues which are currently impacting the climate crisis.

“There is still so much more to be done to highlight the significance of blue and green carbon and the current issues regarding them. Nevertheless, it was great to see ideas and solutions discussed by so many as we become more in tune with the significance of what’s happening to our planet.”