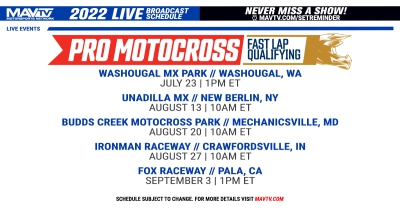 "We were at Redbud a few weeks back and saw how passionate the Pro Motocross fans are. At MAVTV, we love that and wanted to give fans a chance to see more from the Lucas Oil Pro Motocross Championship on network television,” said Bob Dillner, Senior Director, Programming & Development MAVTV. "Fast Lap Qualifying will continue to be streamed through our MAVTV on FloRacing partnership, but it will also be shown live on MAVTV to allow fans to see how things are shaping up for the motos later in the day."