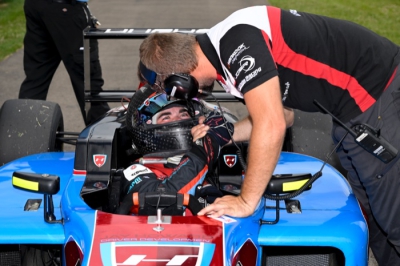 The battle for the driver’s championship has been fierce in the Formula 4 United States Championship Powered by Honda (F4 U.S.). The series has seen five different winners in the first nine events and will enter the second half of the season when they arrive at New Jersey Motorsport Park next weekend.

With a scholarship on the line to compete in the Formula Regional Americas Championship Powered by Honda 2023 season, only 25 points separate the top four drivers, and less than one weekend’s point value separates the top seven drivers. The key to success in the F4 U.S. championship will be consistency, as each driver has failed to score points in at least one race this season. Who takes home the trophy—and a scholarship—will be determined by who best minimizes the effect of misfortune.

Rate this item
(0 votes)
Tweet
« Raoul Hyman Taking Hold as Championship Front-Runner in FR Americas Emerson Fittipaldi: Checo Perez will give Max Verstappen a hard time and he can win at Paul Ricard »