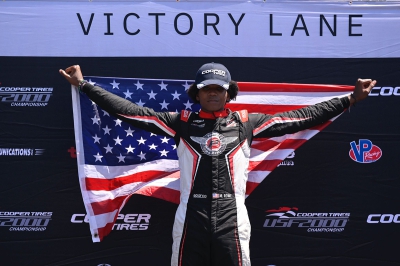 Myles Rowe was simply picture perfect this afternoon as the Atlanta, Ga., native romped to his fifth win of the year. Rowe extended his championship points lead with his seventh consecutive podium finish and brings his Pabst Racing team another step closer to its first driver’s title in the Cooper Tires USF2000 Championship. Crossing the finish line with a comfortable lead of 5.7 seconds over the field, Rowe had little pressure in an all-green flag race on the ultra-challenging 1.786-mile circuit held on the streets of Toronto.
Teammate Jace Denmark finished second to notch his seventh podium of the season with Jagger Jones of Cape Motorsports, a winner earlier in the season at Barber Motorsports Park, in third for Race One of the Cooper Tires Grand Prix of Toronto.
Results
Rowe claimed his third Cooper Tires Pole Award of the year yesterday, but was subsequently issued a post-qualifying penalty of two grid spots for missing the entrance to pit lane and completing an additional lap after the checkered flag fell. That handed the prime starting spot to Denmark with Jones also moving up to slot in second.
Both Denmark and Jones held pace until Lap 3 when Rowe found his way to the front. He held off a brief challenge from Denmark but by Lap 5 had managed a gap of over a second which continued to grow as he settled in comfortably.
Michael d’Orlando of Cape Motorsports, who entered the weekend fresh off his third win of the season two weeks ago, finished fourth after a move on Jacob Douglas of Exclusive Autosport on the opening tour. The biggest mover of the race, however, was his brother, Nicholas d’Orlando, with a gain of three positions to finish ninth and claim the Tilton Hard Charger Award.
With a full bonus points hull for pole, laps led and fastest race lap and another PFC Award for team owner Augie Pabst, Rowe now holds a 26-point lead over d’Orlando.
Following a second qualifying session this morning, Denmark will start on pole for Race 2 of the Cooper Tires Grand Prix of Toronto at 9:45 am EDT tomorrow, followed by Jones, Rowe, d’Orlando and Billy Frazer of Exclusive Autosport.
Provisional championship points after 14 of 18 races:
1. Myles Rowe, 329
2. Michael d’Orlando, 303
3. Jace Denmark, 290
4. Jagger Jones, 250
5. Billy Frazer, 223
6. Bijoy Garg, 196
7. Thomas Nepveu, 196
8. Christian Weir, 168
9. Nicky Hays, 161
10. Spike Kohlbecker, 160.
Myles Rowe (#22 Penske Entertainment-Pabst Racing Tatuus USF-22): “The weekend is going really well right now – we’ve had good pace all weekend. We qualified first but unfortunately got a penalty for missing the pit lane but we made a good recovery. It’s awesome for the whole team to come back and recover to get the win. We qualified third for tomorrow’s race so the job is not done, but it’s a good start to this great weekend.”
Jace Denmark (#23 Radford Racing School Metal Works-Pabst Racing Tatuus USF-22): “It was great to lead the race for a few laps, but my teammate was able to get by. Small mistakes led up to losing the lead, but it’s a really good points day for Pabst Racing. I’m happy with the results but we’ll be going for one more step tomorrow.”
Jagger Jones (#3 Cape Motorsports Tatuus USF-22): “Solid finish in third. We didn’t get the great start we wanted so we were fighting from behind a bit. We need to work harder tonight and tomorrow to figure some things out – and hopefully we can have a bit more pace to run with the front guys. We’re starting second, so we’re all focused on getting the win tomorrow.”
Rate this item
(0 votes)
Tweet
« Foster Extends Points Lead with Dominant Victory in Toronto Fictiv Donates $10,000 in Parts for UC Berkeley’s Formula SAE Electric Race Vehicle »