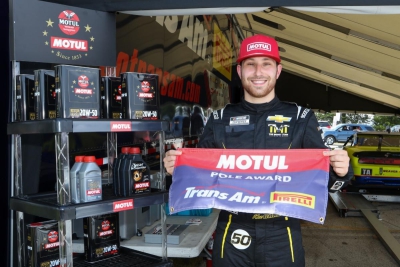 Practice and qualifying are complete for the Trans Am Series presented by Pirelli’s TA/XGT/SGT/GT race at Road America tomorrow. For the second weekend in a row, series newcomer Kaz Grala earned the Motul Pole Award, setting a new track record in his No. 2 Technique Chassis/STEEL-IT/Weaver Dodge Challenger with a lightning-fast lap of 2:02.891.
“That was really, really fun,” said Grala while collecting his pole award. “Yesterday we practiced on our Mid-Ohio tires. We felt like we were pretty fast, but we didn’t really know what tires [Chris] Dyson was on, or how far off our tires were from the other competitors, so we kind of had that question mark headed into today. But when we all put on new tires and were all even, this No. 2 Technique Chassis/STEEL-IT Weaver Dodge was fast; like, crazy fast. The handling was great. I caught traffic on a couple of laps, but luckily the seas parted on one of the laps and I got a totally clean one. I’m having such a blast in these Trans Am cars. We had a heck of a battle for the win last week, and I hate that we didn’t make it to the end to be able to see that through, but hopefully tomorrow we will be able to do just that. It seems like there’s a few more really super-fast cars here this weekend, so I think it’s going to be a great race for the win. I’m glad we’re starting from the point, but we have a lot of work ahead of us to try to spray some champagne on the podium.”
Current points leader Chris Dyson was second in his No. 20 ALTWELL Ford Mustang, making a lap time of 2:03.324. Paul Menard, who returns for the first time since his Charlotte Motor Speedway victory, was third fastest in his No. 5 Franklin Road Apparel Camaro with a 2:04.220. Last week’s TA2 victor Thomas Merrill was fourth in the No. 21 allgram Mustang with a 2:04.267, and David Pintaric rounded out the top five in his No. 57 Kryderacing Ford Mustang with a time of 2:05.030.
Marc Austin in the No. 11 MAD Race Sim Lab Mercedes AMG GT3 was the fastest in the XGT class with a time of 2:13.962, followed by Randy Hale in the No. 31 Hale Propeller Corvette with a 2:16.011, and Danny Lowry in the No. 42 BridgeHaul/Bennett International/Pitboxes Audi R8 LMS with a 2:18.933.
Cindi Lux topped the SGT class, laying down a lap time of 2:18.208 in her No. 45 Lux Performance Group Dodge Viper. Milton Grant in the No. 55 Sentry Self Storage/Springhill Suites Porsche 991.1 was second with a 2:19.901, and his son Carey Grant was third in the No. 6 Grant Racing 2 Porsche GT3 Cup with a 2:20.448.
Full qualifying results can be found here.
Yesterday in practice, Dyson topped the TA charts with a best time of 2:04.576. Grala was second with a lap time of 2:05.441, followed by Pintaric with a 2:05.792. Menard was fourth with a 2:06.141. Ken Thwaits in the No. 5 Franklin Road Apparel Camaro was fifth with a time of 2:06.497.
Hale was the fastest XGT car with a 2:16.152, followed by Austin with a 2:18.990 and Lowry with 2:19.903.
In SGT, Milton Grant was quickest with a 2:20.850, with Leuenberger second in class with a 2:21.813. Carey Grant was third with a 2:22.172, followed by Larry Bailey in the No. 02 Logical Systems Inc./Sam Pierce Chevy Corvette with a 2:31.163.
Full practice results can be found here.
The TA race will be contested on Saturday, July 2 at 5 p.m. CT. The event will be broadcast on CBS Sports Network and will premiere on Saturday, July 9 at 2 p.m. ET, with an encore presentation on Sunday, July 10 at 10 p.m. ET.
Rate this item
(0 votes)
Tweet