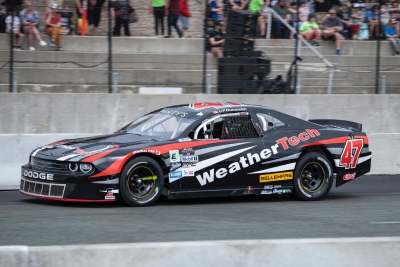 Patience and adaptability defined the weekend experienced by Louis-Philippe Dumoulin and the #47 WeatherTech Canada | Groupe Bellemare team, during the NASCAR Pinty's Series' first ever visit to the ⅜ mile oval track at Eastboud International Speedway.

On Saturday morning (June 25), rain forced a schedule change, combining practice and qualifying into a one-hour late morning session and changing the race start time to Sunday, June 26, at 11 a.m. (local time - 9:30 a.m. EST).  “Looking at the track on Saturday morning, the configuration of the walls surprised me. The regulations here appear not to be the same as at the other tracks, it seemed a little dangerous and I told myself to stay away from the walls.”

Starting 4th on the grid, based on the best times from the practice session, Louis-Philippe Dumoulin had a quick car for the race. “The car was handling very well at the start, as my crew had come up with great settings for the early part of the race as well as a good plan on what to change to also make it quick for the last part of the race and make the podium.” explains the three-time series champion.

Sixth on the restart after the halfway point, things went sour as Louis-Philippe Dumoulin “rubbed the wall a little bit between turns 2 and 3, which caused a right rear flat. As I entered turn 3, the #47 WeatherTech Canada | Groupe Bellemare car slid sideways. I tried to avoid the barrels that were positioned there, but without success, hit them hard and broke the rear suspension.”

This incident on lap 120 abruptly ended Louis-Philippe Dumoulin’s race. “The team will have a lot of damage to repair on the oval car when we get back to the shop. In the meantime, we are working hard on the street car to come back even stronger in Toronto,” concluded the driver of the #47 WeatherTech Canada | Groupe Bellemare car.

The #47 WeatherTech Canada | Groupe Bellemare team had an unusual experience this weekend: racing at the easternmost tip of Canada. The drivers of the team rigs had to drive for over 25 hours and navigate the high seas on a ferry to get to Newfoundland.

The combined practice and qualifying session allowed Louis-Philippe Dumoulin to quickly come to grips with the oval track. “The Practice went well for us on the track that was unknown to most of the teams and that we all had to learn. It is fun to drive and I am sure that the race will be exciting. In terms of set-ups, we were conservative as we don't know how the track surface will change over the race distance with 22 cars dropping rubber and oil on it for 225 laps. My focus for the first half of the race will be to fine-tune the settings that should be applied to the suspension during the mid-race pit stop to improve the car for the final push.”

Next events: an 8-race sprint over the next two months (see results table for details)

After the Newfoundland and Labrador race, the #47 WeatherTech Canada | Groupe Bellemare team begins the most intense portion of the season: back in the shop, preparing the road course and oval cars for both the Toronto street course, the trio of oval races in Edmonton and Saskatoon, followed by the most important event of the year for Dumoulin Competition, the Grand Prix de Trois-Rivières on the urban circuit, then the dirt oval race in Ohsweken, west of Toronto and the ICAR Mirabel reconfigured airport layout.