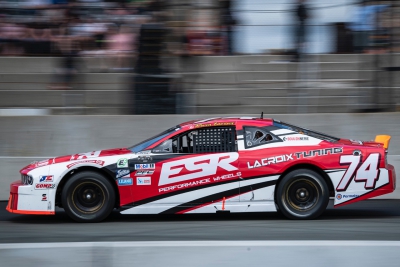 It was a first for the NASCAR Pinty's drivers on Sunday as the Canadian NASCAR series took to the track for the first time in Newfoundland-and-Labrador this past weekend.

Eastbound International Speedway hosted the first attempt at a race on Saturday, which was eventually postponed to Sunday due to rain. This new track did not suit Kevin Lacroix, who thought he would succeed there. The Saint-Eustache native finished in 7th position after a remarkable comeback at the beginning of the race.

"It's a fairly long oval, so our car was fast," explained the driver of the #74 Lacroix Tuning | ESR Performance Wheels | La Boulonnerie. With the qualifying session cancelled due to rain, the practice times were used to set the starting grid for the race.

"We were fast; I started from 6th position and worked my way up to third before the halfway point. I was faster than Lapcevich (Treyten), so I think we could have taken the second place."

However, Lacroix suffered significant problems with his steering as he clipped the outside wall. "The walls on this track are made differently than at other tracks. They are angled like the walls on the highway, so cars were climbing on them at the slightest contact."

After the incident, Lacroix began to lose ground. "It was a very long second half of the race!" With only a five-minute pause between the two segments, the Lacroix Motorsports crew could not fix his steering.

"It's a shame to finish this way, especially when thinking I could have finished second. I am now 10 points behind Camirand (Marc-Antoine). We've had our share of bad races, but our luck will pick up. Especially for the next four events; Toronto, Edmonton and Saskatoon twice, we are usually very fast there."