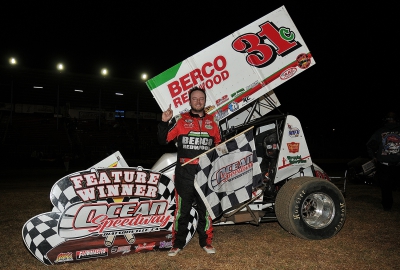 “It’s awesome to win. You hate to kind of get gift wrapped it. Joey’s one heck of a young driver. I wish we would have gone green the whole time. It would have been a great race between all of us. I haven’t been up front a lot this year and I had a little rust on how to control a race,” Cox said.

Caeden Steele won the Dirt.Travel Fast-Time Award but it was Cox taking the pole for the 30-lap feature after winning the dash.

Outside pole sitter Zane Blanchard of Hanford soared past Cox on the start, but Brendan Warmerdam of Lemoore had a hard side over side crash into turn one that nullified the pass. Cox restarted back on the pole for a complete restart and took control of the race with Steele advancing past Blanchard for second. Visalia’s Connor Danell flipped in turn four to bring out the red flag again on lap two.

Steele threw a slide job attempt at Cox in turn three on the restart but Cox held the position. Fourth starting Kurt Nelson of Gilroy backpedaled a bit on the restart, while Ancona entered the picture by driving up to third. Roseville’s Colby Copeland was also on the attack, advancing from 11th to fifth by lap six. The leaders encountered lapped traffic for the first time on lap ten. Ancona snookered second from Steele on lap 11 in turn four. Rickey Sanders slid to a stop in turn two for a caution on lap 14.

Ancona used the restart to drive past Cox on the outside and take the lead on lap 15. Steele made a bid to the inside of Cox for second on the backstretch but Cox held it on lap 17. Steele took over the position on lap 18, but it was nullified when Bret Barney of Rohnert Park stopped in turn two.

Copeland capitalized by taking third from Steele on the restart. Meanwhile Livermore’s Travis Labat advanced from 14th to fifth as well. Ancona faced off with side-by-side lapped traffic which allowed Cox to move in. Cox dove underneath Ancona into turn one on lap 24. Ancona turned under the traffic to follow Cox and was clipped by a spinning lapped car. The contact sent Ancona into a flip down the backstretch which ended his bid for the win.

“We just kind of buried ourselves qualifying there,” Copeland said. “The main – the track got way slicker and wider than I thought. Hats off to the track crew. I know they’ve been doing a good job here the last couple of weeks. Looking forward to getting back here in three weeks (for the Howard Kaeding Classic).”

In other action on Friday night, Jonathan Hagio of Prunedale won his third IMCA Sport Modified 20-lap feature of the season. The race started off with a caution which relegated Max Baggett of Prunedale and Oakley’s Jacob Mallet, Jr. to the tail of the field. Igor Gandzuk of Prunedale took over the lead on the outside on the restart. Pole sitter Austin McMillan of Atascadero went the wrong direction and fell outside the top-five.

Pittsburg’s Chuck Golden ran down Gandzuk and passed him in turn two to lead lap six. Watsonville’s Billy Robertson then tracked down Gandzuk for second. The pair made contact on the front stretch which hooked Gandzuk across the track. Hagio narrowly avoided contact in a close call to bring out the caution flag on lap 14. Hagio went to the outside to get the lead on the restart. Golden tried to battle back on the inside on lap 16 but Hagio held steady and claimed victory. Golden, Mallet, Adriane Frost of Watsonville, and Freedom’s Cody Bryan rounded out the top-five.

Jason Lazzerini of Moss Landing won his second Four Banger feature of the season. 14-year-old Amaya Flowers drove to the front for the second consecutive week and again suffered woes that unhinged her race, slowing on the backstretch with a flat right front tire. Watsonville’s Tony Gullo and Santa Cruz’s Troy Moore were gathered in the melee which brought out a caution on lap three.

Joe Gallaher won his seventh Hobby Stock feature after starting at the rear of the field. The win in the 15-lap contest also extended his points lead. Freedom’s Wally Kennedy put up a solid fight for seven laps before Gallaher grabbed the lead on lap ten. A caution on lap 14 set up a green-white-checkered finish which did not deter Gallaher. Gallaher, Kennedy, Santa Cruz’ Ryan Muller and Brady Muller, and Dan Fassler of San Jose were the top-five finishers.