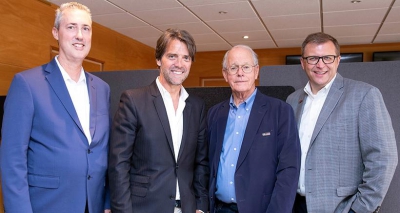 It’s one of the most popular technical specifications of sports cars to compete in an IMSA-sanctioned class, and it’ll keep competing in IMSA for the foreseeable future.
IMSA officials today confirmed the long-term extension of an agreement with the Stephane Ratel Organization (SRO) that could enable cars built to GT4 technical specifications to continue in IMSA through the 2028 season. Currently, GT4 cars are used in the IMSA Michelin Pilot Challenge Grand Sport (GS) class.
“The decision to incorporate GT4 into the Michelin Pilot Challenge GS class prior to the 2017 season continues to be a sound decision,” said IMSA President John Doonan. “Aside from the fields in some of the single-make series IMSA sanctions, the GS class routinely draws the largest fields at every race.
“It’s a tremendous customer racing platform that has been embraced by several manufacturers, at a price point that is attractive to many teams and drivers. We are pleased to work with Stephane Ratel and his team at SRO to continue to provide GT4 action to IMSA fans for many seasons to come.”
Eight different GT4 manufacturers, 37 different teams and 86 different drivers have competed in the GS class in at least one IMSA Michelin Pilot Challenge race. The GS class has averaged more than 28 cars per race through the first four races of the season.
"We are very pleased to confirm the long-term extension of our license agreement with IMSA for the GT4 category,” said SRO Motorsports Group Founder and CEO, Stephane Ratel. “According to the global survey we conduct each year, GT4 has now surpassed all other GT categories in terms of cars racing worldwide. This success is thanks to the many championships and series on multiple continents that have adopted this well-priced yet highly competitive formula. With this announcement, we can look forward to GT4 remaining an important part of the IMSA Michelin Pilot Challenge in the Grand Sport class for many more years to come."
The next opportunity for race fans to see GT4 cars in action is Saturday, June 25, when the Michelin Pilot Challenge returns to Watkins Glen International for the two-hour Tioga Downs Casino Resort 120. The race will be streamed live on Peacock, with television coverage airing on USA Network at 3:30 p.m. ET on Friday, July 1.
Rate this item
(0 votes)
Tweet
« Nico Rosberg gets back behind the wheel Johnson Finds Watkins Glen a Real Laughing Matter »