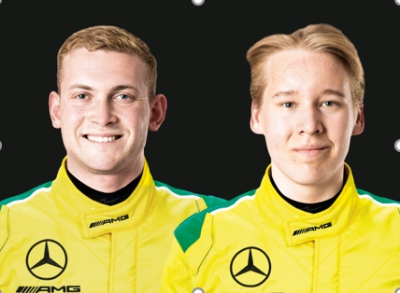 MANN-FILTER Team LANDGRAF announces that Mamba pilot Jonathan Aberdein will no longer drive for the team as of the ADAC GT Masters race in Zandvoort. Both sides will make a new sporting line-up for the remainder of the 2022 season. In his place, young talent Lorenzo Ferrari (19, Italy) will start alongside Raffaele Marciello at the Zandvoort round. The Italian Silver Driver Ferrari won both the Endurance and Sprint classifications in last year's Italian GT Championship and celebrated no fewer than seven race victories. So far this year, his racing has included the GT World Challenge Europe Endurance Cup, where he finished second in Q2 at Circuit Paul Ricard in France. "We remain strongly focused and will not let the championship out of our sight," affirms Klaus Landgraf.

One becomes two: In addition to the current Mamba, MANN-FILTER Team LANDGRAF will send a second yellow and green Mercedes-AMG GT3 into the race starting in Zandvoort. Behind the wheel will be the talented young drivers Frank Bird (22, UK) and Elias Seppänen (17, Finland). Seppänen has already gained experience driving the virtual Mamba as a sim racer in the digital Nürburgring Endurance Series and has completed an intensive testing program in preparation for his GT3 debut season. Bird has already shown his talent with two class victories in the 2021 Silver Cup and has experience driving GT3 cars.

As usual, MANN-FILTER will be reporting on its social media channels about the events on and alongside the track, giving fans exclusive looks behind the scenes.