Louis-Philippe Dumoulin Eager to Run on the Eastbound International Speedway 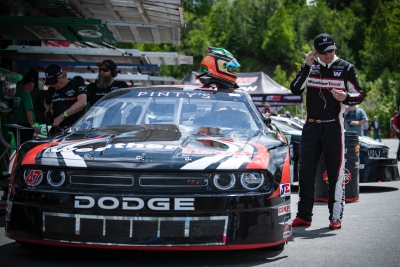 The #47 WeatherTech Canada | Groupe Bellemare team is getting ready for a new track this Saturday in Newfoundland and Labrador. The NASCAR Pinty's Series will be venturing to the Atlantic province for the first time this season, but certainly not the last as a three-year partnership has been signed by the Pinty's Series and Eastbound International Speedway.

“After two years without visiting the Eastern part of the country, I'm so happy to be going to an Atlantic province,” said Louis-Philippe Dumoulin, who will be taking his #47 WeatherTech Canada | Groupe Bellemare car to the Avondale oval. “This will be the first time for the series at Eastbound International Speedway. I am proud to be part of the group introducing this great race track to NASCAR and to our series.”

He goes on to state that, “Getting there is a challenge for the whole team, but we're all very excited and can't wait to get on track.” The 225 Pro-Line event will be run over two 112-lap segments with a 5-minute break between them.

The NASCAR Pinty's Series drivers have never run on this track and will be learning about lines, braking and throttle management during the Saturday practice session scheduled to start at 9:15 am. As per his usual approach to a race, Louis-Philippe Dumoulin has done his homework, “I've watched videos and talked to a lot of people who know the track layout that looks like Kawartha. There is no real banking in the corners, but an interesting one to learn and drive on, as it seems to be a fast track with good straights, which will create a lot of passing and action. The track looks well maintained and the organizers are proud of their facility. It should provide a great show.”

“Our goal for the weekend remains the same as in previous races: I would like to get back to winning. We are due for a podium or a top-5, that's always what we aim for. At the moment, the battle for the championship is intense, we have to keep that in mind. We're working hard on the car, we're not missing much to get right up to the front of the pack so we need to continue to improve our oval set-up and get it all sorted out.”

Louis-Philippe Dumoulin is currently fifth in the drivers' championship, just four points behind the leader. “The championship is like a long race. My goal is to keep improving our position in the standings while driving smart. We run well at certain tracks, and we need to follow through and get the best results we are capable of,” concluded the driver of the #47 WeatherTech Canada | Groupe Bellemare car.