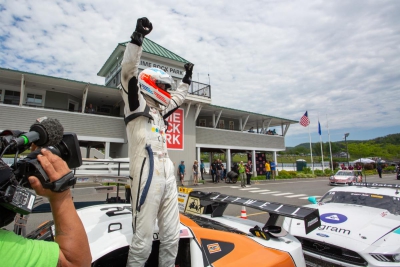 Chris Dyson had another successful weekend in the Trans Am Series presented by Pirelli, winning the Lime Rock Park Memorial Day Classic in the TA class for the third year in a row. Dyson captured his fifth Motul Pole Award of the season and led from green flag to checkers at his home track, earning his fourth-consecutive win and fifth race victory of the season. With his teammate Matthew Brabham finishing close behind, Dyson’s CD Racing team earned a 1-2 finish, while Dyson’s father, Rob Dyson, presided over the race as Grand Marshal.
Starting from the top spot, Dyson, who won in Trans Am’s last two visits to Lime Rock in 2019 and 2021, jumped ahead of the field in his No. 20 ALTWELL Ford Mustang when the green flag waved, which is where he remained for the entirety of the caution-free race. After the start, Dyson was closely followed by the No. 23 McNichols Co. Chevrolet Corvette of Amy Ruman, who battled hard against Dyson’s CD Racing teammate Matthew Brabham’s No. 21 allgram Mustang. Brabham made the pass on Ruman after eight laps, and held the second spot for the remainder of the race. Ruman fought hard to maintain the third position, racing skillfully against the No. 7 Franklin Road Apparel Camaro of Ken Thwaits, but Thwaits made the pass on lap 22, claiming the final step of the podium with a third-place finish and leaving Ruman to finish fourth.
“This place just means so much to me, it’s overwhelming,” said Dyson as he emerged from his car. “This place meant the world to me growing up, coming out here with my family and watching my dad race. It really planted the seed of my love for this sport. Now, to come back here and have success, a 20-year career, I’m very fortunate. I have a sense of perspective that I obviously didn’t have as a kid, but I have the same sense of love for this place. Winning on Memorial Day never gets old. And it being Memorial Day, we’ve got to be mindful of why we’re celebrating today and honor those who have given their lives so we can come out here and enjoy our freedoms.”
Randy Hale in the No. 31 Hale Propeller Corvette was the winner in the XGT class, finishing fifth overall.
“It was hot, but a lot of fun,” said Hale on the podium. “This is my home track, and it’s the most beautiful track in the world. It’s where you used to be able to come and sit on the grass and have lunch with Paul Newman. The Hale Propeller car was just unbelievable to drive today, and I’m so grateful to have my family here with me.”
The GT and SGT classes saw lots of excitement, with the winners decided in the closing laps. Billy Griffin in the No. 14 Griffin Auto Care/Sheehan’s Towing Ford Mustang and Michael Saia in the No. 13 Rapid Performance Management/Rapid Wraps/Motul Porsche GT3 Cup 99 battled it out in the GT class, swapping positions the entire race. In the end, it was Griffin who came out on top, and he was also awarded the ChillOut Keep Cool Move of the Race.
“This is my first time here, and it’s such a beautiful place,” said Griffin. “The car was hooked up pretty good. I’d like to thank my crew, my wife, my family. The car was awesome, the competition was awesome, and I had a lot of fun racing against everybody. It took a long time to get around them, but I was patient, put my head down, and made it work.”
In SGT, Danny Lowry in the No. 42 BridgeHaul Porsche GT3 Cup and Jason Berkeley in the No. 67 Falls Village Inn Corvette also had an exciting race, with Berkeley having the advantage in the beginning of the event. Unfortunately, mechanical problems for Berkeley paved the way for Lowry to take over the lead and win the class.
“It was a blast,” said Lowry. “This was my first time up here at Lime Rock, and I was about as lost as a duck in a desert for a while. I got behind by about 20 seconds, then I had to pedal hard to catch up once I figured out how the heck to drive the track. I really enjoyed Lime Rock. Beautiful track, beautiful area, and I love these fans. I was really happy to come out and drive for them.”
The broadcast of today’s race, presented by Franklin Road Apparel, will air on CBS Sports Network on Thursday, June 2 at 7:30 p.m. ET, with an encore presentation on Saturday, June 4 at 12:00 a.m. ET.
TA returns to the track June 23-26 with the Mid-Ohio SpeedTour at Mid-Ohio Sports Car Course.
Full race results can be found here.
Rate this item
(0 votes)
Tweet
« John Carney II Sweeps ASCS Southwest/POWRi Desert Weekend At Vado Speedway Park Josh Green Procures Podium Finish in Freedom 90 Oval Race »