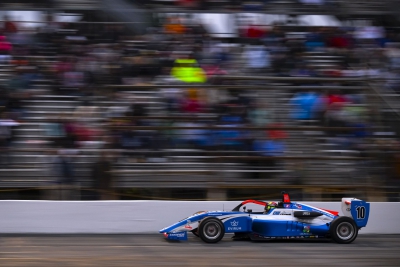 The USF2000 series was at the Lucas Oil Raceway last Friday night for the only event of the season on an oval track. Thomas Nepveu, driver of the #10 Cromwell | Pétrole Bélanger | Home Hardware | Karting Excellence car, finished sixth in the 75-lap Cooper Tire Freedom 75.

It was a challenging two-day event as the rain came and delayed the track activities on Thursday and Friday. However, Thomas had a great qualifying session once the skies cleared, posting the 5th fastest time.

The race, delayed by an hour and a half due to bad weather, went off without a hitch, much to the dismay of some rivers who would have liked a caution to bring the field together. The start of the race went very well for Thomas, who spent several laps battling with competitors around. As the race progressed, the Oka native settled into 6th place.

"It was a really good race," said Thomas. "The start went well, I tried to pass the 4th place driver for about five laps, but I ended up staying in 5th. Then Jagger Jones made a good pass and took my position. My goal after that was to fall into a good momentum to try a pass again later on, but eventually, my strategy changed to aim for a perfect race."

"All the drivers on the track were fast, and the field was very tight. We had a great car, so I'm very happy with the result." As Thomas mentioned this week, it is challenging to overtake on the oval track; it can sometimes take ten laps to complete the maneuver.

"Solid points run again after 75 laps under green,"  said Coy Arbour, Thomas' coach. "Thomas managed his strategy well and without making any mistakes. We look forward to the next race at Road America, where he scored his first Road to Indy win."