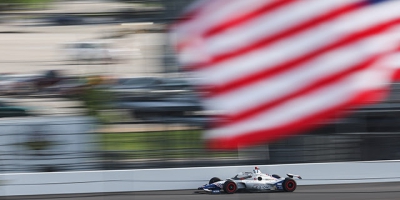 Chip Ganassi Racing continued its dominance of this Month of May at Indianapolis Motor Speedway, as Tony Kanaan was the fastest overall and led three of the team’s drivers in the top four of the speed chart Friday during Miller Lite Carb Day practice for the 106th Indianapolis 500 presented by Gainbridge.

“We've been happy with the car all week,” Kanaan said. “That is no secret that the cars are good. We did a few pit stops there, run a couple things. But honestly, we didn't change anything.”

Two-time Indianapolis 500 winner Takuma Sato broke up the Ganassi speed show by clocking in at third at 226.839 in the No. 51 Nurtec ODT Honda.

NTT P1 Award winner Scott Dixon, who set the fastest pole speed in “500” history last Sunday, was fourth at 226.696 in the No. 9 PNC Bank Chip Ganassi Racing Honda. Sage Karam was the fastest Chevrolet driver and fifth overall at 226.517 in the No. 24 AES Indiana DRR Chevrolet.

Ganassi’s strength wasn’t limited to just the top four spots, as all five of the team’s drivers ended up in the top 14. Jimmie Johnson was the fastest “500” rookie and seventh overall at 225.974 in the No. 48 Carvana Chip Ganassi Racing Honda, while reigning NTT INDYCAR SERIES champion Alex Palou ended up 14th at 225.435 in the No. 10 NTT DATA Chip Ganassi Racing Honda.

The results further validated the speed the Ganassi team showed during qualifying last Sunday, as all five of the team’s drivers will start in the first four rows of the 200-lap race Sunday.

This was the last action on the 2.5-mile oval before “The Greatest Spectacle in Racing” on Sunday (live coverage starts at 11 a.m. ET on NBC, Telemundo Deportes on Universo and the INDYCAR Radio Network). But Andretti Autosport and Dale Coyne Racing with HMD will face a busy Friday evening and Saturday after two crashes during the session.

Herta climbed from the car after the AMR INDYCAR Safety Team carefully turned the car onto its wheels. The car suffered extensive damage.

At 1:44 p.m., Rookie David Malukas did a half-spin and hit the SAFER Barrier in Turn 1 with the left side of his No. 18 HMD Honda after side-by-side contact with the No. 23 Palermo’s Screamin Sicilian DRR Chevrolet driven by Santino Ferrucci entering the turn. Malukas was unhurt, but his car suffered extensive damage.

Ferrucci was held in his pit box for 20 minutes after the incident in a penalty for avoidable contact levied by INDYCAR officials.

All 33 drivers in the starting field participated in the final practice. The field combined to turn 1,590 laps, with rookie Callum Ilott leading the laps completed column with 68 in the No. 77 Juncos Hollinger Racing Chevrolet.

This was Newgarden’s first victory and the third for chief mechanic Travis Law, who led the No. 3 crew to wins in 2015 and 2016 with Helio Castroneves. Team Penske’s last victory came in 2017 with the No. 12 Verizon Team Penske crew and driver Will Power.

“Everybody showed up, and we did what we had to do,” Law said. “Hats off to everybody involved, the guys back at the shop to get the equipment ready. Can’t thank them enough.”

The last team and driver to win the annual competition between the best NTT INDYCAR SERIES crews and the Indianapolis 500 in the same year was Team Penske and Castroneves, in 2009. Team Penske also earned its first Indy 500 victory 50 years ago this year, with Mark Donohue in 1972.

“Maybe a little good mojo,” Newgarden said. “Like Travis said, we had a little slower lane there, and they made the difference on that final stop to get it done. I’m always thrilled to show up at the racetrack because I know I have the best of the best behind me.”