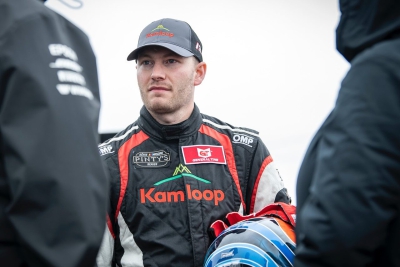 The past weekend was a very intense and satisfying NASCAR Pinty's event for Louis-Philippe Montour, the driver of the #13 Kamloop | GL électricité-automatisation car. Thanks to his perseverance, a strategy that paid off in the end and a strong performance from the car, Louis-Philippe Montour finished fifth at the Ebay Motors 200 held at the Canadian Tire Motorsport Park on Sunday.

From the weather conditions to the action on the track, it was a dramatic and action-packed two days for the driver who was in only his second start in the NASCAR Pinty's Series. Although he was not completely familiar with his car, Louis-Philippe Montour started out with a major advantage; the Canadian Tire Motorsport Park holds no secrets for the Blainville native since he has raced there multiple times in the FEL Motorsports Series last year. He was therefore able to concentrate on learning the behaviour of his race car without worrying about the layout and reference points of the track.

The Saturday practice session did not go as planned for Louis-Philippe Montour who only completed two laps due to mechanical problems. However, Dumoulin Competition quickly diagnosed the problem and repairs were made. A violent thunderstorm, close to a mini tornado, put an end to Saturday's NASCAR Pinty's activities. With the drivers unable to take the track for qualifying, the practice times were used to set the grid for the Ebay Motors 200.

Louis-Philippe Montour was counting on the qualifying session to make up for the lack of practice, but he still had to start the race from grid position 21. "We had two practice laps, no qualifying and I had never driven this car in the rain and with this setup before," said Montour after the race.

"I'm really happy because the mechanics worked really hard. We had brake problems and differential problems on Saturday. To move up from 21st to 5th in the first race of the season makes me very proud of the team and of the #13 Kamloop | GL électricité-automatisation car."

Louis-Philippe Montour's rise through the pack was impressive, to say the least, as the young driver stayed out of risky situations, with only one objective in mind: to break into the top-5. Opting for a strategy that paid off, Louis-Philippe Montour stopped twice in the pits, to get new tires and fuel. On the track, he used his intelligence, patience, and a little luck. He benefited from a Lucky Dog pass, given to the first driver not on the lead lap when a caution flag comes out. That driver can then pass the whole pack and the race leader and go back around the track back to behind the lead-lap cars, having scored a lap, and restart the race from there - a big plus on a long track like CTMP. This gift took place near the end of the race and meant that Montour could move up from 6th into the top-5 in the last two laps of the race.

"My experience in Mosport certainly helped me," he continued. "The conditions were very changeable, because at the beginning of the race we were on rain tires. There was a lot of water, but the track was drying out lap by lap. These are pretty physical cars to drive, and I have very few laps in a NASCAR car. It went well and I'm pretty proud.

The next event is in Toronto on July 15. I've never driven on that track before, so it will be a first for me," he concluded.

Louis-Philippe Montour would like to thank GL électricité- automatisation, a company specialized in automation, instrumentation and industrial process programming, as well as Montour Ltée, DSL Transport, Catarina, Benny & Co. and Nord-Ouest Climatization for their support throughout the 2022 season.

In addition to the on-track partnership, Louis-Philippe Montour and Dumoulin Competition also work together on the team's logistics. Indeed, Kamloop allows the team to optimize the processes and to offer even fresher food during the events. Read the full article here.