Victory and New Partner for Kevin Lacroix at Ctmp! 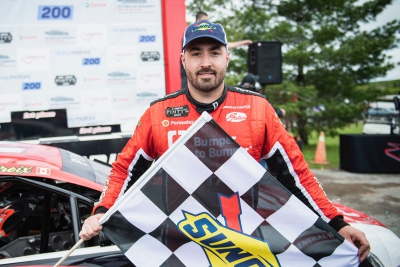 It was one of the most spectacular weekends for competitors and fans alike at Canadian Tire Motorsport Park as a storm, worthy of a mini-tornado, hit the Bowmanville area. The entire crew of the #74 Lacroix Tuning | ESR Performance Wheels | La Boulonnerie car was safe and sound, but the storm thwarted Saturday's plans. However, the team leaves Mosport with the win and the lead in the NASCAR Pinty's Championship standings.

Thus, it was in 8th position that he took the green flag on a damp track. Canadian Tire Motorsport Park being Lacroix's favourite track, he quickly began his climb through the field in a determined but thorough manner. "It was an intense start to the race with Andrew Ranger chasing me, but we fought a respectful battle," said Kevin Lacroix.

Much of the race went smoothly, with Kevin Lacroix taking a significant lead, which suggested a peaceful win. However, two competitors came to a standstill on the track due to mechanical problems, forcing a caution that lasted several laps.

The race ended with the infamous 'green-white-checkered.' This process gave the drivers a chance to try to claim the win for two laps. With Lacroix taking the lead on the outside, Alex Tagliani gave him a hard time in the first few corners, but Lacroix was able to get away and regain a slight lead.

Further back in the field, a three-car accident brought the race to a halt, regrouping the drivers once again for another green-white-checkered attempt.

"It was a very intense end to the race; I would have preferred not to have the stress of having to defend my pole position twice on restarts. My goal was to keep my car intact while the other drivers were fighting. On the last lap, Gary (Klutt) passed me. He was fast, but he was very erratic in the last three corners, he didn't know where to go, so I took my place. I tried to pass him respectfully, but we touched on the last corner," admitted the Saint-Eustache native.

Kevin Lacroix celebrated his sixth win at Canadian Tire Motosport Park, which is the perfect kick-off for the team's new main partner, ESR Performance Wheels. "We were looking for a way to announce our new partnership, and I can't think of a better way than to get the win today!" In addition to the win, Lacroix is now leading the NASCAR Pinty's Driver Championship.

The next NASCAR Pinty's event will be on Quebec soil at Autodrome Chaudière on June 11. The Ebay Motors 200 will be broadcasted on May 28 at 4 pm on TSN and on June 12 at 10 am on RDS2.