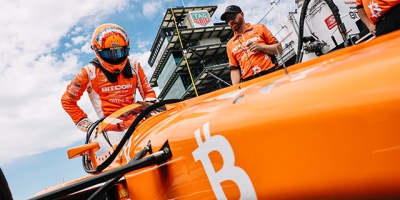 It was a very good time either to be powered by a Chevrolet engine or drive for Chip Ganassi Racing on the first day of PPG Presents Armed Forces Qualifying for the 106th Indianapolis 500 presented by Gainbridge on Saturday at Indianapolis Motor Speedway.

Chevrolets propelled the three fastest qualifiers, led by Rinus VeeKay’s four-lap average speed of 233.655 mph in the No. 21 Bitcoin Racing Team with BitNile Chevrolet, while all five of Ganassi’s Honda-powered drivers ended up in the top 12 and will advance to the final two rounds of qualifying Sunday, including the Firestone Fast Six that determines the winner of the NTT P1 Award for pole.

“It’s a good start,” VeeKay said. “It shows we have a good car and confidence for tomorrow. We can definitely challenge for pole. I think Ganassi is definitely our biggest rival out there for challenging for pole.”

Positions 13 through 33 in “The Greatest Spectacle in Racing” were set during today’s qualifying, which was interrupted twice by rain and lightning for a total of two hours, 14 minutes and cut short by 60 minutes.

The second round of qualifying, for the 12 fastest drivers today, starts at 4 p.m. (ET) Sunday. The six fastest drivers from that round will advance to the Firestone Fast Six, which starts at 5:10 p.m., and turn another four-lap qualifying run for the NTT P1 Award and its $100,000 prize.

Live coverage of the last two rounds of qualifying starts at 4 p.m. (ET) on NBC, with the INDYCAR Radio Network also providing coverage.

“It’s pretty awesome, and I’m just so thankful to be part of the group,” Johnson said about the Ganassi team performance. “Watching them prepare literally since they left here last year and continually thinking of this race, and it being a motto to win here before the championship. To be a part of it, to live it, to now be here experiencing it is really cool.”

Three-time Indy 500 pole sitter Ed Carpenter was seventh with a four-lap average at 232.397 in the No. 33 Alzamend Neuro Chevrolet after topping the morning practice with a single lap of 234.410, the fastest trip around the 2.5-mile IMS oval since 1996. Marcus Ericsson of Chip Ganassi Racing was eighth at 232.275 in the No. 8 Huski Chocolate Chip Ganassi Racing Honda, with “500” rookie Romain Grosjean leading Andretti Autosport in ninth at 232.201 in the No. 28 DHL Honda.

A trio of Indianapolis 500 winners rounded out the drivers to advance to the Round of 12 qualifying.

Two-time Indy 500 winner Takuma Sato ended up 12th at 231.708 in the No. 51 Nurtec ODT Honda. Sato was forced to make a second attempt after his first run of 232.196 was disallowed after INDYCAR officials penalized Sato for qualifying interference and failure to follow instructions, affecting another competitor. While slowing on his cooldown lap after his first attempt, Sato was judged to have impeded the qualifying attempt of the next driver, Marco Andretti.

Rookie David Malukas just missed the cut to advance to Sunday, ending up 13th and just behind Dale Coyne Racing teammate Sato at 231.607 in the No. 18 HMD Honda.

While Chevy powered the first three drivers on the speed chart after qualifying, Honda struck back with a 7-5 edge among the top 12.

There was a common thread between VeeKay, O’Ward and Rosenqvist besides Bowtie engines. All three drew low numbers in the qualifying order Friday night and made their attempts in the first 15 minutes of qualifying, when the track temperature was just 85 degrees.

The air and track temperature continued to climb until the first rain arrived, dropping grip and speeds. By 12:30 p.m., 90 minutes into qualifying, the oval’s asphalt was 107 degrees.

A practice for the 12 remaining qualifiers will take place from 12:30-2 p.m. Sunday, with live coverage on Peacock Premium.