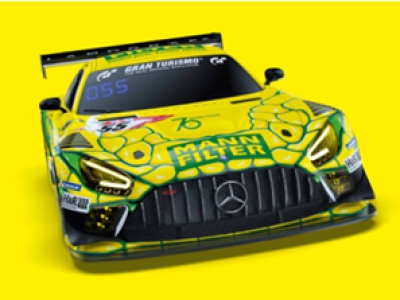 The 24-hour race on the Nürburgring Nordschleife is one of the toughest endurance races, with over 200 teams taking part. The event attracts the crème de la crème of motorsport, and those who conquer the “Green Hell” can consider themselves among the best racing drivers in the world. In the 50th anniversary year, MANN-FILTER is once again taking on this great challenge and leaving nothing to chance in its bid to win the PRO/AM classification.

The legendary Nordschleife – a demanding 25.378 kilometers

Former Formula One driver Sir Jackie Stewart gave the track the nickname “Green Hell”, which is still used to this day – and it's certainly well deserved. The Nordschleife and the Grand Prix circuit on the Nürburgring combined are 25.378 kilometers long. A lap of the track takes a little over eight minutes. The racers have to give one hundred percent concentration if they want to master the 72 corners – Uphill, downhill, tight corners, long corners, fast stretches, and the famous Karussell. Then there are the freak weather conditions that you won't find at any other race track. Snow, rain, heat, hail – they've all happened here.

MANN-FILTER pins its hopes on a top-class driver quartet

To survive the legendary circuit, MANN-FILTER is leaving nothing to chance. The premium filter brand is also putting quality first when it comes to the team drivers, with Dominik Baumann (29, Germany), Patrick Assenheimer (30, Germany), Luca-Sandro Trefz (20, Germany), and Julien Apothéloz (21, Switzerland) sharing driving duties behind the wheel of the Mercedes-AMG GT3 in the iconic yellow and green MANN-FILTER livery.

Dominik Baumann is a Mercedes specialist. In recent years, the 29-year-old has competed in national and international racing series, finished runner-up in the ADAC GT Masters, and won countless podiums. “It will be my first race in the MANN-FILTER colors,” he says, clearly pleased about his new role. This will be his eighth start in the 24-hour classic.

His teammate is AMG performance driver Patrick Assenheimer. “I'm really looking forward to taking part in the 24-hour race for MANN-FILTER. It's one of the most amazing races in the world and an iconic track. The ultimate goal is to win the PRO-AM classification.” Assenheimer has already proven his credentials on the Nordschleife, and the Heilbronn native has been a fixture in the Nürburgring Endurance Series for several years.

Third in the lineup is talented young driver Luca Sandro Trefz. The 20-year-old has been part of the MANN-FILTER family for a long time. As a junior driver, he and his teammate Julien Apothéloz narrowly missed out on winning the ADAC GT4 Germany championship title in 2020 and only a year later was promoted to the ADAC GT Masters. “We've been working really hard in preparation for this race since last year,” he says confidently. “Obviously, I'm absolutely delighted that it's finally happening. I've driven this track in the MANN-FILTER colors before and I'm very proud to be representing the iconic yellow and green once again.”

Completing the quartet is Julien Apothéloz, who is determined to achieve a strong result. “I can't wait to get behind the wheel of the MANN-FILTER Mamba for the second 24-hour race of my career.”

One team, one goal: to handle the Nordschleife

MANN-FILTER and Landgraf Motorsport have become a well-established team since joining forces last year. The partnership in the ADAC GT Masters has been a success so far. For the 24-hour race, MANN-FILTER is once again relying on the expertise and experience of the successful racing team from Gensingen. Team principal Klaus Landgraf has a very personal connection to the racing classic: “The Nürburgring 24-hour race is one of the most famous races in the world. In the past I was able to get to know the “Green Hell” as a driver and experience its uniqueness firsthand.” As team principal, he uses his personal experience to support the team from the pits and the pit wall. “I'm very pleased that we are contesting this year's race with MANN-FILTER. Our car will certainly stand out in the field with its striking livery and is sure to be a fan favorite.”

A lot of spectators are expected to attend on the 50th anniversary of the 24-hour race. MANN-FILTER will also be at the AMG Fan Base where there will be a Pit Stop Challenge, and will keep fans updated with exciting stories about events behind the scenes through its social media channels.

Rate this item
(0 votes)
Tweet
« Christine GZ: "Every Athlete Should Have a Mental Trainer" Halfway There and Anyone Can Still Win DPi Crown, We Swear »