"Max: The Dutch Master – The Unauthorised Biography of Max Verstappen," by André Hoogeboom, Now Available in the U.S. 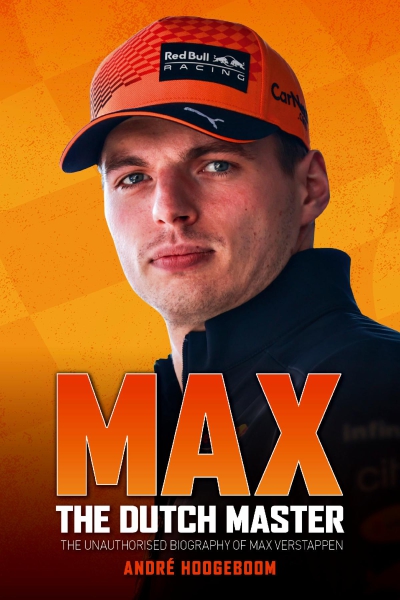 "MAX: THE DUTCH MASTER – The unauthorised biography of Max Verstappen" by Andre Hoogeboom, is the first English-language biography of Formula 1's sensational new superstar, and is now available in the U.S.
Born into motorsport, Verstappen started karting at age 4 and in 2015 became the youngest driver ever to race in Formula 1, less than six months after his 17th birthday.
Following his first Grand Prix victory in 2016, he quickly established himself as a future World Champion and by 2021 he'd accomplished his goal. Like a true Dutch Master, Verstappen has brought fresh artistry into F1 and made this most glamorous of sports even more exciting.
This unauthorized biography, written by a leading Dutch F1 journalist, examines Verstappen’s remarkable rise to worldwide fame, covering every step of his career in detail as well as providing insights into his spirited character and supreme talent.
Key content:
• Early days: nurtured by racing driver father Jos, Verstappen had a long apprenticeship in karting, from a first title in Belgium in 2006 to the climax in 2013 as World KZ Champion in the top KZ1 category.
• Rapid single-seater gestation: only 12 months elapsed between his first single-seater experience, a Formula Renault evaluation at Pembrey in South Wales, Australia, and his F1 test-driving role with Scuderia Toro Rosso (Red Bull’s junior team) in 2014.
• The fairytale begins: after débuting in Australia, his full F1 season with Toro Rosso in 2015 brought 10 points-scoring finishes — and much acclaim.
• Transfer to Red Bull: Verstappen was elevated to the ‘senior’ team for the 2016 Spanish Grand Prix — and almost miraculously became F1’s youngest ever winner first time out.
• F1 consolidation: ever-growing maturity in each of the next three seasons brought seven more F1 victories, culminating in Honda-powered 2019 delivering third place in the championship standings.
• The championship beckons: following pandemic-afflicted 2020, Verstappen soon emerged as championship favorite in 2021, intent on toppling Lewis Hamilton from his throne.
• Expert assessments: insights from three-time World Champion Sir Jackie Stewart and leading journalists Peter Windsor and Will Buxton.
About the Author:
André Hoogeboom is a Dutch journalist and writer specializing in Formula 1, and currently runs his own press and consultancy agency. His unauthorized biography of Max Verstappen was first published in The Netherlands in 2016 and has now been much expanded and adapted to bring it up to date and to suit English-speaking audiences. His other books about motorsport include a history of Zandvoort (his country’s premier race track), a reconstruction of the adventures of Dutch car manufacturer Spyker (including its short-lived F1 experience), and two novels, Deadly Ambition and Sabotage. He lives in Alkmaar, near Amsterdam, in The Netherlands.
Rate this item
(0 votes)
Tweet
« 50th Anniversary Season of Lucas Oil Pro Motocross Championship Charges Onto MAVTV Motorsports Network, Racing Legends Added to Broadcast Booth Each Race Christine GZ: "Every Athlete Should Have a Mental Trainer" »