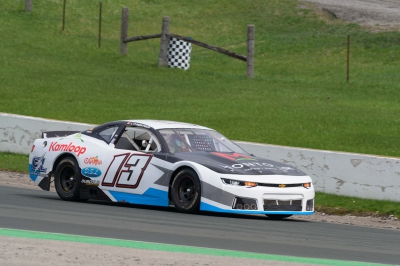 The wait is over for Louis-Philippe Montour who will be back on track in the NASCAR Pinty's Series, driving his #13 Kamloop | GL électricité-automatisation car prepared by Dumoulin Competition.

The Blainville native will race on the 3.9-kilometer track located 40 minutes from Toronto for the first time in a NASCAR Pinty's Series car. Louis-Philippe Montour knows the layout intimately however, after having raced there in the Sports Car Championship Canada series in 2021.

"I drove on the track for the first time in an official NASCAR Pinty's Series practice session a few weeks ago. We took delivery of my brand new Dumoulin Competition Camaro at the track, where I was lucky enough to be helped by Jean-François and Louis-Philippe Dumoulin.

Testing went very well. The car produces less downforce than what I am used to and I had to adapt my driving accordingly. On the good side, I've always done well at CTMP, winning several SCCC series there. It's a track where I'm comfortable, so it's looking good," Louis-Philippe Montour said.

Louis-Philippe Montour is well aware of the high driving standards in the NASCAR Pinty’s Series. "I got my first taste of the series on the urban track at the Grand Prix de Trois-Rivières. My car was quick and easy to drive. I noticed that there was less runoff area there than at CTMP but that was not a problem for me in the race. I learned how to be at ease in with fields of 30 to 35 cars on the track. A Trans AM car remains a stock car racer as is the Pinty’s one and I have a lot of experience in that type of car. » according to Louis-Philippe Montour.