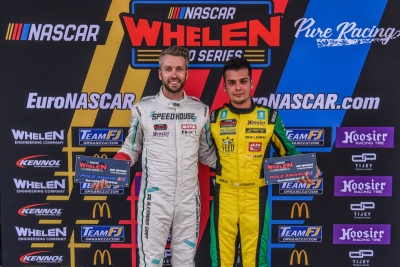 The NASCAR Whelen Euro Series kicked off with Qualifying on Saturday morning at the legendary Circuit Ricardo Tormo under the burning sun of Spain. Two thrilling qualifying sessions provided the first surprises of the 2022 NWES season with Alexander Graff grabbing his maiden Pole Award in his career in EuroNASCAR PRO at the wheel of the #64 Speedhouse Chevrolet Camaro. In EuroNASCAR 2, Vladimiros Tzortzis burned a phenomenal lap into the asphalt to take his second career pole position.

EuroNASCAR PRO: The Swede is back!

After his forced break in 2020 and a part-time program in 2021, Graff returned to EuroNASCAR PRO with Speedhouse in phenomenal fashion. The Swede ended up first after climbing into Superpole for the top-10 drivers after the 15-minute Q1 session. The 35-year-old then clocked a 1:41.803-lap to beat CAAL Racing’s Nicolo Rocca by 0.105 seconds. Gianmarco Ercoli ended up third with a 0.291 gap on the pole sitter.

Topping the Junior Trophy standings was EuroNASCAR PRO newcomer Tobias Dauenhauer in fourth overall. The two-time EuroNASCAR 2 runner-up was fastest in Q1 and had only one strategy in Superpole: “Flatout!” The German was followed by Frederic Gabillon in his #3 RDV Competition EuroNASCAR FJ, who rounded out the top-5. Marko Stipp Motorsport’s Romain Iannetta was sixth ahead of Marc Goossens and Sebastiaan Bleekemolen. Giorgio Maggi was the second fastest Junior Trophy driver in ninth, while Patrick Lemarie’s provisional pole lap was canceled due to track limit infringements.

“That’s awesome, it’s a comeback for me in EuroNASCAR and it’s also my brother’s birthday today so he’s got a little present here!” said an ecstatic Graff after the session. “It started really well, I didn’t know I was on pole before I got into the pits. I heard Lucas [Lasserre] say P1 or something like that and I was like ‘no no no’ but everyone else was really happy in the pit box and that’s amazing! Thanks to all the guys in Speedhouse, they have done an amazing job with the car.”

“It couldn’t start better actually, I learned a couple of things yesterday in testing that I need to improve my driving style in the car so I tried to adapt it in the Qualification and it went well! Lucas is one of the oldest friends in EuroNASCAR for me so it’s amazing to be with the team, it’s a really familiar feeling and I like it a lot.”

Leonardo Colavita completed the Junior Trophy top-3 in eleventh, followed by reigning EuroNASCAR 2 Champion Martin Doubek, who topped the Challenger Trophy ranking. He bested Fabrizio Armetta in 13th place with Claudio Cappelli rounding out the Challenger Trophy top-3 in 15th place. Three-time NWES Champion Alon Day will only start from 16th after his best Q1 lap time was canceled. The Israeli had no time left to improve due to a late red flag period triggered by the retirements of Thomas Krasonis and Ian Eric Waden, with Vittorio Ghirelli also having problems earlier in the session that stopped his Q1 run early.

After leading the grid to the green flag at Circuit Zolder in 2021, Tziortzis did it again! The Cypriot in the #5 Academy Motorsport / Alex Caffi Motorsport EuroNASCAR FJ burned a phenomenal lap into the cooking asphalt of Circuit Ricardo Tormo. The 25-year-old clocked the track in a blisteringly fast lap time of 1:41.997, therefore pushing YouTube star and CAAL Racing rookie Alberto Naska off the throne. The latter was leading the standings in the first part of the 20-minute session before he was beaten by Tziotzis by 0.460 seconds.

“First of all it’s my favorite track so I was expecting we’ll have a good lap, so we put everything together this weekend,” said a happy Tziortzis. “We’re going well until now so I’m very positive for it, we are fast, we worked hard with the team in the last pre-season test at Cremona and Magione so we are in a good way and I’m happy for all the members of the team that worked so hard to be here today.”

“With Patrick we have similar needs of the car so we worked hard in the last two pre-season tests. We have the same feelings in the car so this is the most important for a driver who shares the car to have a good teammate like Patrick. Of course we have to start very well from the beginning and to keep going with good stability during the laps, which is the most important thing during the races.”

With Naska fighting his way into the front row for his first EuroNASCAR 2 race, the Italian also topped the Rookie Trophy classification. Reigning Champion Doubek was third, 0.594 seconds short of the pole sitter, while Gil Linster and former EuroNASCAR 2 Champion Ulysse Delsaux rounded out the top-5. Colavita ended up sixth ahead of Loris Hezemans’ younger brother Liam Hezemans, who had a solid run in his first EuroNASCAR outing.

The 2022 NASCAR Whelen Euro Series is underway at the Circuit Ricardo Tormo in Valencia, Spain. All races on Saturday and Sunday will be broadcasted live on the EuroNASCAR social media profiles – YouTube, Facebook and Twitch  – as well as on Motorsport.tv and more TV channels all over the world. The upcoming live stream will begin at 2:05 pm CEST.